Arade Fire sound like they were having an absolute blast throwing Everything Now all together, 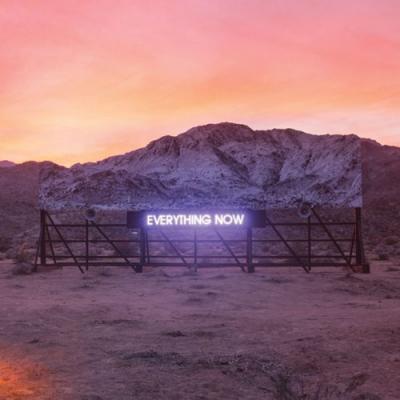 If you classify yourself as an Arcade Fire fan, you will more than likely be underwhelmed by the band's fifth album, Everything Now. However, if you are like me and find the band's most beloved output to be largely overrated and public persona pretentious (don't worry, I'm a Father John Misty fan, I get it), the good news is that you may actually find something to enjoy about Everything Now. Past the over-thought and undercooked "campaign" and the dress code controversies surrounding the album lies Arcade Fire's most straightforward release yet, and whether or not that's a good thing simply depends on who's listening. Ripe with pop melodies and squeaky clean production, Everything Now leaves the ambition and filler of previous double-LP Reflektor and doubles down on its ABBA-like danceability. There is pandering to current trends (the title track features a pan flute), more self-seriousness (the Funeral-referencing "Creature Comfort") and a surface-level "wokeness" that would make the average festival-goer blush (the "Infinite Content" tracks), but I'd be lying if I said the band didn't sound like they were having an absolute blast throwing it all together, and there's certainly an audience for that. — Aaron Mook