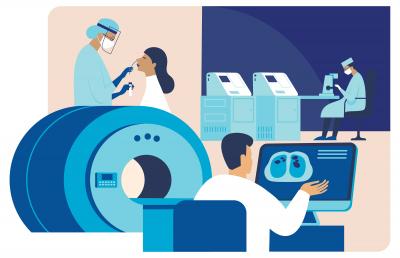 By now, you've heard that COVID-19 does not discriminate — it has claimed the lives of young and old, male and female, black and white, and everything in between. But as the body of research on the novel coronavirus expands, there's growing evidence that it takes to some individuals more readily than others. Yes, there are the observable risk factors such as age, behavior, preexisting conditions and comorbidities such as obesity, diabetes, heart or kidney disease. But recent discoveries point to things on a more microscopic level — down to specific genetic sequences — that make infection more severe for some and milder for others.

Before founding Erie-based AcousticSheep, LLC and inventing SleepPhones with business partner Jason Wolfe, Dr. Wei-Shin Lai had her sights on becoming a CDC official after graduating with distinction with a B.S. in Cellular Molecular Biology from the University of Michigan and earning her M.D. from the University of Virginia Medical School. She ultimately took a different path toward entrepreneurship and sleep science, but she retains a strong and active interest in epidemiology. In a recent conversation, she highlighted two threads of research that may be especially eye-opening to those who may have held a more blasé attitude toward the pandemic in the past.

The first major age-independent risk factor appears to be blood type, in particular type A versus type O individuals. Those with type A blood were nearly one-and-a-half times more likely to have symptoms severe enough to require hospitalization; conversely type O individuals were only two-thirds as likely to be as sick as the "baseline" COVID-19 patient.

This observation was drawn from a large-scale study out of Europe this month with roughly 4,000 participants (2,000 patients and 2,000 controls). The study screened all 700,000 currently mapped locations in the human genome for clues. Only two gene locations yielded any insights — a location possibly dealing with the ACE2 (angiotensin converting enzyme) receptor on Chromosome 3 (which relates to how the virus infiltrates the cell), and another location definitely involving blood type on Chromosome 9.

This has nothing to do with red blood cells themselves, mind you — as far as we know, SARS CoV-2 (the official name of the virus sponsoring the COVID-19 pandemic) does not target red blood cells. Rather it implicates gene sequences in the immediate vicinity of blood type relating to inflammation and coagulation (clotting).

Dr. Lai explains, "Genes tend to cluster together. People with light-colored hair tend to have blue eyes as opposed to brown eyes, and people with darker colored hair are (usually) going to have brown eyes." Likewise, blood types A and O have clear associations with certain inflammation and coagulation factors.

SARS CoV-2 has been shown to thicken the blood, increasing the likelihood of large and small blood clot formation. Even smaller blood clots can be damaging, inhibiting the ability for the lungs to exchange oxygen or presenting as spots or rashes on the extremities, such as the now-infamous "COVID toes." People with blood type A would seem to be more susceptible to these clots and inflammation, and thus more frequently experience more severe symptoms.

From the beginning, COVID-19 has proven to be bad — but according to another study out of the prestigious Scripps Research Institute in San Diego, recent cases have generally been worse. The study identified two strains of novel coronavirus — the original "China" strain that arrived in the U.S. through Washington State, and the mutated "Europe" strain that arrived in the U.S. through New York. "Unfortunately, the East Coast strain has kind of taken over; that's the one that's really spreading throughout the world right now," Dr. Lai laments.

The reason the mutated version is more infective is the relative stability of the spike protein "keys" it fits into the ACE2 receptor "locks" to invite itself into host cells. The China strain "didn't always have the right configuration to bind to the ACE protein," Dr. Lai explains. Compared to the "West Coast" strain, the "East Coast" strain binds to ACE2 receptors at a rate of about 60 percent vs. 30 percent. That is, it's about twice more likely to cause problems.

So, to recap so far: individuals may have a comparatively worse time with SARS CoV-2, independently of any observable demographic, depending on whether they:

Unlike Sam's Club or Costco, when it comes to novel coronavirus, we cannot discount volume. Exposure dose refers to the number of virus copies encountered simultaneously at a given point in time. If you're just briefly brushing past someone with COVID-19 on the street, your exposure dose will be small; if you're at a surprise birthday party in extended close quarters with friends and family members and someone coughs or sneezes (as happened in Texas), you'll be exposed to an exponentially higher dose of viruses.

In theory, your body should be better equipped to mount an immune response to a smattering of viruses on the skin than an all-out invasion you've directly inhaled. This is why healthcare workers who've contracted COVID-19 tend to feel much worse than someone who may have contracted it incidentally through community spread. The more viruses initially present for replication, the harder it is for the immune system to keep up (and ultimately catch up). Exposure doses tend to be much higher indoors than outdoors where there is more room to disperse and ultimately dissipate.

Wearing a mask or other personal protective equipment indoors limits the number of viral copies that ultimately reach you, but with reopenings of places like bars and restaurants — places where people must necessarily have their mouth open — a lot of time is spent with masks off. When in close proximity with others, this can be very dangerous. "That's why it's being banned. It's because it's very, very high-risk," says Dr. Lai, alluding to the re-closing of bars in areas such as Allegheny County, which last week experienced daily records in case counts.

Too hot to handle?

Dr. Lai confirmed that warm weather does play a role in virus survival. For instance, a virus is likely to break down on a playground set baking in the hot summer sun, whereas it will ride out a winter intact (consistent with cold and flu season). But indoors where atmospheric conditions are moderated, the current season is essentially negligible. Floridian and Texan summers are notoriously oppressive, yet these states are experiencing the worst caseloads in the country.  As long as people are too close and/or too careless, COVID-19 will continue to spread.

"I'm looking at the trends for the rest of the nation and it's just scary. Honestly, Texas?! At least in New York City, at the time [when case rates peaked] everyone was scared … and because they were so scared, they actually listened," Dr. Lai postulates. "Now it seems like it's been so politicized that if you're on one end of the political spectrum, you're just not going to pay any attention at all. I predicted in April that people would wise up, but evidently I was too optimistic with that."

Dr. Lai is currently prognosticating that the pandemic will hang around at least another year, which is obviously going to try everybody's patience more than it already has. While we can't control things like our genetics and blood type, we can control our attitudes and behaviors. By presenting less favorable scenarios for the virus to spread and replicate, we can engineer a more favorable outcome.

by Nick Warren10 hours ago
No local deaths reported by Erie County Dept. of Health