Are You For Real?!?!: Dolemite is My Name is the Funniest Film of the Year 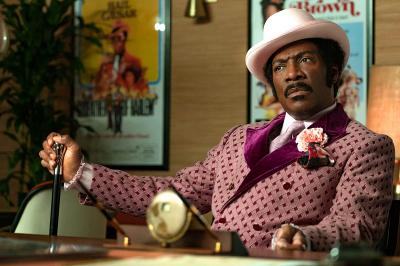 For the last 20 years or so, the blaxploitation sub-genre has finally been receiving the respect that it deserves. No longer just a curiosity known only to grindhouse and drive-in aficionados, these entertaining and often very bizarre films have been celebrated in the form of biopics like Mario Van Peebles' Baadasssss! or parodies like the hilariously insane Black Dynamite. And now we have Dolemite is My Name to join them and bring attention to one of the strangest and most inspiring Hollywood success stories of all time. The result is just as funny and entertaining as its title character.

The story follows Rudy Ray Moore (Eddie Murphy in his best performance in years), a stand-up comedian who releases a series of raunchy spoken-word albums that garner him some unlikely fame. As his notoriety grows, Moore decides to take things to the next level and begins working on his own movie. The result would become the obscenity-spewing, kung-fu fighting action/comedy known as Dolemite, and Moore would become a blaxploitation icon.

From the screenwriting duo of the legendary Ed Wood (Scott Alexander and Larry Karaszewski), this movie — like that film — takes you right into the trenches with a man of dubious taste and talent, to say the least. Similarly, the main character has a determination that is so infectious, you can't help but root for him. The film does a phenomenal job showcasing the DIY indie energy that made Moore's films so enjoyable as well as highlighting the importance of these films to marginalized groups. It's a rags-to-riches story like no other: one full of gunfights, car crashes, and the best bad kung-fu ever committed to film. Dolemite is My Name comes to Netflix Instant on October 25th. — Forest Taylor