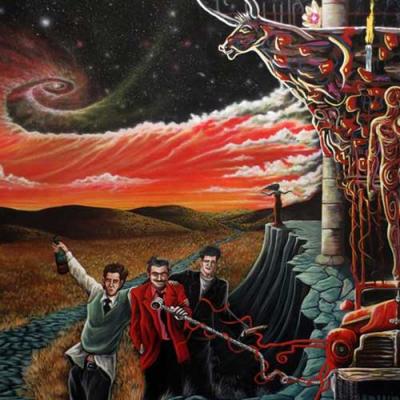 Stern, lonely faces stare out of empty vortexes. A shrouded figure composed entirely of heavily-lidded eyes wades through the sea. A huge man resembling Christ dances with a small faceless abstract woman among gigantic flowers. Ponderous bare legs tapering to tiny feet dance down toward the ground from low-hanging clouds.

Such are the mind-blowing worlds imagined by Kris Risto.

When you first see Risto's paintings in the Urraro Gallery, your reaction may be a simple one: revulsion, joy, confusion, wonder. On the surface, any one of several words could sum up a cursory glance of Risto's work: weird, disturbing, surreal. For someone willing to go deeper and spend time with each image though, a universe of possible meanings and new surprises opens up.

It is impossible to talk about these dreamy, half-real images without mentioning their similarities to the surrealists. Surrealism meant to change people's thinking. It was born out of the strife and conflict of a war. It incorporates symbols and archetypes from the artist's subconscious. Surrealism makes serious statements about the real world through playful imagery that distorts reality. Risto's paintings have all surrealism's characteristics – the whimsy, the Jungian symbolism, and the contradictions.

But where surrealism is often impossible to understand, the imagery in this show presents itself as accessible. In fact, much of the imagery comes directly from Risto's heritage: Greek mythology, Orthodox Iconography, and ethnic conflict. If you are willing to do a little research, the potpourri of Risto's reverie starts to make surprising sense.

To find out about the work, you can start by talking to Kris Risto himself. Unlike many artists whose standard line is, "If an artist has to explain his art, it isn't very good," Risto is happy to give some interesting insights into the backstories of his paintings.

Risto's family comes from Macedonia and he spent several years growing up there. His paintings often have their impetus in this heritage. The Macedonian people have had their share of troubles over the years, living with and fighting with the Serbs, Albanians, Greeks, and Turks. Since life in the Balkans often seems surreal and contradictory to the American mindset, the inclusion of Macedonian flags and people in traditional costume seem unexceptional in a composition that also contains spaceships or demons.

But don't be fooled. The people in these paintings are often real: friends of his father, who spent a wild youth traveling with a band throughout Yugoslavia, Risto's son, or friends from Erie's art community. The paintings may seem weird, but they are decipherable if you don't let your mind be blown.

A saint standing atop a 1950s era coupe is easy to decode because it can be put into context. Try doing that with a Dali painting sometime: flaming giraffes and women with drawers in their stomachs can be a little bit inscrutable because the symbolism comes from Dali's subconscious. A classic car can just be a symbol for a classic car in one of Risto's paintings – part of a story from the real world. Risto mixes ingredients from history, Christian tradition, Greek mythology, and modern science into a weird narrative that is all his own.

In fact, the weirdness factor can overwhelm you if you try to take in all the symbolism at once. Instead, when you go to this show, spend time with just a couple of the pictures. The familiar archetypes will start to stand out and you will divine great meaning from them. You may even be inspired to do some further investigation and gain knowledge you previously did not know.

For instance, were you aware that a depiction of a left hand means giving whereas the right hand signifies protection? Or that a shroud is not just a mysterious covering, but signifies the labor of women and something of immense value?

Any artwork that asks you to learn something new is of immense value itself. Spend time with Risto's art and you are bound to have some new insights and ideas of your own. Just don't try to take it all in at once or you may, in fact, have your mind blown.

This is not Risto's first show in recent years. He has been prolific despite the time-consuming detail he puts into his paintings. Every one of his shows is different, so if you want to see these consciousness-expanding (and mind-blowing) illustrations, get to the Urraro Gallery before July 13 – because you may not get another chance.

If you go on a Friday evening, your host Laurie Urraro will have some great live music for you. You can also get one of the amazing Concord wine slushies they sell at the wine bar there: a perfect beverage to sip while your mind is blown.