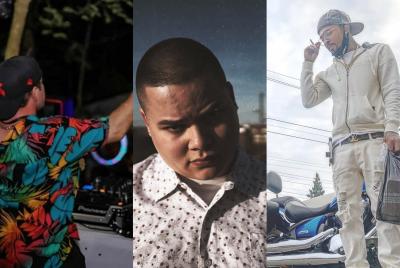 What's going on readers and music lovers? As we're breaking into summer, the world is opening back up after an intense year of dealing with the deadly COVID-19 outbreak. Fans of live music no longer had shows to attend to catch their favorite acts, especially here in Erie. But as always, our local musicians will use any opportunity to curate more projects for our thirsty ears, whether the world is on timeout or not. Here are three more of our 814 musical craftsmen that you can expect to hear this year.

Between a fiery flow and connecting with some major artists, Erie's own Tayjer has not let his foot off of the gas yet. With his recent video and single, "Motivation," featuring Erie artist Ducky and the legendary Fat Joe on the intro, this artist is allowing his content to prepare us for what's next. "I actually plan to do two EPs," says Tayjer. "The goal is to make people see that there really are people in this city taking themselves seriously and who have the talent and could make it into something professional one day." Tayjer has been keeping his recording sessions with the same engineers (OTOD Duck and Nick IAmADon) and has been working with producers such as Bino BeatItUp and NoTes to build his EP. He is also in talks with DJ Salt and is interested in working with producer/engineer Chauncy Bill$up. "As far as a time frame goes, all I can say right now is that it's all in the very early stages, and I'm currently in the process of collecting the perfect package of beats," claims the rapper. "But I promise I'm going to make it all count, no matter how much time it takes. I'll also be working on and releasing singles in between."

EDM music has made quite a name for itself, packing venues and showing the dancefloor little mercy all over the country. The sound itself is warped, atmospheric, heavy, and hyped — which drives high energy and all around good fun. DJ Voto has seemed to master this craft, but with a year of venues being closed down, the DJ and producer took his time away to hit the laptop and put some pieces together. "The creative process on my new project has been very easy!" Voto exclaims. "It isn't always easy to produce the next song but it seems like these songs are flowing easily out of my mind into the software." This time around, the EDM artist is working up a surprise. "Expect something a little different," he hints. "I am experimenting with some new sounds with the same trap duo style I tend to go for. It will definitely be something you'll enjoy!" DJ Voto confesses that the lack of shows made creating music seem forced but was able to reassess his down time. "I figured it out by the middle of the pandemic. So luckily for me, I got out of my funk and made one of the most funky tracks of my career! I took it all with a grain of salt and made the process as positive as possible."

L Cardio is no stranger to the local hip-hop scene. Multiple tracks and even full albums have had his production attached to them through the years, making him one of the top producers in the City of Erie. Now, the young producer is not only giving us beats but also rhymes for his solo debut It's My Turn. "I'm doing both (producing and rapping) this time around, but I normally produce so this time I'm displaying my art and my craft," says L Cardio (aka Cardi Beatz). "I have a lot to prove. This is my debut mixtape since I haven't dropped my own project in years so I have a lot of surprises for this project such as features and producer collaborations. So be prepared for the newness of me." L Cardio has always been the kind of artist to renew himself sonically and show you a different side to his works. With his debut mixtape on the way, listeners will be in for yet another treat from the legend himself. "Yeah, I've been cooking something up," says L Cardio prior to our interview. Best believe that our plates are ready.