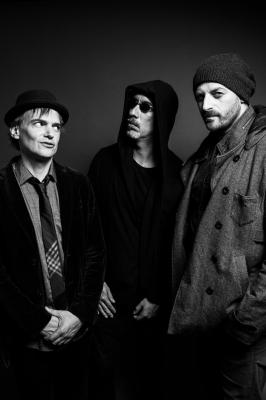 Like many cities of its size, Mexico City is known for its cultural conductivity, channeling a diversity of culinary, musical, and artistic traditions into one creatively charged atmosphere. Since 2011, Minnesota transplant Todd Clouser has been feeding off that energy as the head of A Love Electric. The multiethnic power trio — featuring Clouser on guitar, Argentinian Hernan Hecht on drums, and Mexico City native Aaron Cruz on bass — has generated a buzz in the jazz community with their unclassifiable musical mole.

Their style has been variously described as "power-psych, punk-jazz, post-genre, and freak rock," but it's all pinned down with an undeniable sense of groove — it's like the chocolate in a mole poblano sauce that keeps the chili peppers in check. Earlier albums in the band's catalog fell more exclusively into the "instrumental jazz" category (akin to the work of collaborators John Medeski and Billy Martin of the "avant-groove" trio Medeski Martin & Wood), but more recent entries in their discography dabble in prog (the King Crimson-inspired title track from 2013's The Naked Beat), blues ("2100" off of 2015's Son of a Hero), jazz-rock ("Jungle Earth" from their latest effort, 2016's Psychmonde), and even hip-hop ("Be That Mule," also from Psychmonde).

The group comes to Artlore Studio having released seven albums in their seven years together, with over 1,000 live performances under their belt (on four different continents, no less). Well-traveled and well-practiced, the eclectic collective promises to be … well, electric. — Matt Swanseger