Attack of the PACA!

Attack of the PACA has three days full of events lined up including music, readings, performances, and demonstrations. 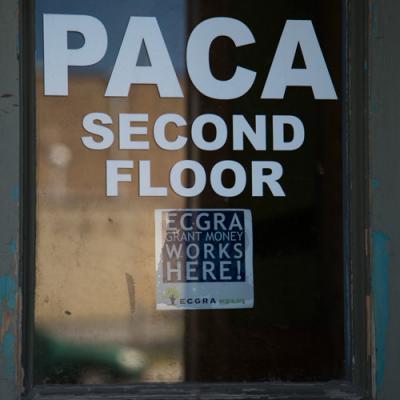 Every good movie sequel has to offer up new and dazzling special effects to impress the audience. PACA is no different as it rolls out its third annual Attack of the PACA, now a three-day celebration of the arts. "We have been using the '50s sci-fi, B-Movie concept for the first two Attacks," says Jeff Rodland, chief impresario of the event. "So I thought, many of those cheesy movie series had a third installment that was in 3-D." So expect a 3-D look or feel wherever it can be accomplished.

As always, theater, music, poetry, and visual arts fill the dance card, but PACA has a few new tricks up its sleeve. Alongside the host of monologues, skits, and short works presented on both Friday and Saturday evenings will be the play Funeral Parlor by Christopher Durang that will be presented in Sense-O-Vision. Larese Floral is supplying the sense of smell via a funeral arrangement, and Duskas-Taylor Funeral Home is donating prayer cards and other funeral home items, according to Rodland.

PACA has also rearranged the schedule a bit compared with past Attacks. Rather than interspersing all genres throughout the night, the theater acts will take place from 6 to 10 p.m. and the music will start after that. Friday night features an opening act by Brett Fallon and Saturday opens with a group of monologues from the likes of writers Kelli Powell, Maya Angelou, Will Levesque, Sojourner Truth, Dudley Randal, Wade Bradford, and Alice Walker.

Both nights include the musical review, Kelly and Friends, short plays and some monologues done by John Stockhausen, as well as Funeral Parlor.

Rodland says "many people are turned off by theater because it means sitting in a chair for three hours, but these are 45 to 50-minute sets, so you can come and see one, or two, and book it; or you can stick around and see some really awesome live music."

Bands booked for the music lovers include Liquid Nixon, Desmond Collier, and Human Flux on Friday; Teatime, The Lower Eastside Connection, and Matt "Broke" Boland on Saturday. Poetry on the back stage will take place at 7:30 and 8:30 p.m. both nights.

New this year is a third day, designed especially for the younger scene. Starting at noon on Sunday, enjoy a marionette version of Pinocchio presented by the National Marionette Company and move on to making pirate sock puppets, playing pirate games, and learning pirate songs. At 4 p.m., PACA will present 13 Ways To Screw Up Your College Interview.

But wait there's more! A Kung Fu demonstration will take place each evening and a visual arts show will be mounted where artists were encouraged to incorporate 3-D elements into their works.  Several more fun activities and artists have yet to be finalized.

So, as always, PACA delivers a full-throttle worth-the-price-of-admission event. And no need for awkwardly fitting 3-D glasses.  —Mary Birdsong