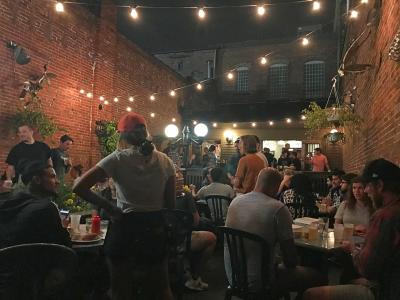 According to educational researcher Arthur Chickering's Theory of Identity Development (1969), which focuses on college-aged students, the first step to establishing one's sense of self is gauging his or her core competencies in relation to others. No, not in beer pong, flip cup, kings, or quarters — but in terms of intellectual, physical, and interpersonal prowess. In the social sense, at least, there's some correlation. Never have I ever claimed to be an expert in the matter, but fitting in has always been the ultimate drinking game.

At least two experts, psychologists M. Lynne Cooper of the University of Missouri and Christopher Cronin of the University of St. Leo, agree with me. Both cite "social motive" or "social camaraderie" as one of three primary reasons college students drink, along with mood enhancement and tension reduction (or coping). Our college years are all about putting ourselves out there, sometimes for the first time — as a candidate for new and more diverse friendships, intimate relationships, internships … all kinds of -ships. There's a lot of opportunity implicit in that and — for better or worse, a lot of pressure alcohol can help relieve.

If the presence of alcohol were enough, though, college students would go just anywhere. But context matters. So what makes a bar a college bar? Firstly and most obviously, its proximity to college campuses and college students. For instance, Best of Erie 2018 "Best College Bar" runner-up Cornerstone Bar and Grill is almost synonymous with Mercyhurst University students, owing to its prime location on the corner of East 38th and Pine Avenue and relative lack of nearby competition. Gannon University is located in Downtown Erie, making the surrounding area their students' playground.

The next major consideration is affordability — unfortunately, the "poor, starving college student" is also one of the most common. Matt Gawlik, a recent graduate of Gannon, has become somewhat of an authority on budget barhopping through his work with a team of software and business students on the Hippoh smartphone app. The crowdsourced app has helped over 4,000 downloaders find their "watering hole" since its July 2018 launch, listing nearby food and drink specials based on the user's current location. The app has since expanded to include local festivals and limited-time goings-on.

"If it has to do with eating or drinking, we promote it," Gawlik affirms.

Hippoh also sponsors several bar crawls throughout the year, especially during the colder months when it's important for young people to "shake cabin fever" and get them out of their dorms, apartments, or houses to be more social. The bar crawls make stops at venues like Bourbon Barrel (2018 Best of Erie runner-up for "Best Nightclub"), Docksider, Coconut Joe's (the "Best Nightclub" category winner), and BIGBAR (runner-up for "Best New Bar or Club"), with the dance floors and club beats that encourage twenty-somethings and collegians to forget their inhibitions and let loose.

Gawlik most closely interacts with the college-aged crowd, however, as a bartender at the Plymouth Tavern.

Perhaps no other bar in Erie has the same crossover appeal as The Plymouth Tavern, as evidenced by our readers voting it both "Best College Bar" and "Best Neighborhood Bar" last year. Whether it qualifies as a "neighborhood bar" in terms of location is somewhat debatable, but it certainly feels that way. As for the "college bar" designation? Stop in on virtually any night of the week between 9 and 11 p.m. and try to argue against it.

"Everyone feels welcome there," says Gawlik. "Some of the other establishments are more about the clubbing or dancing or whatever. But at the Plymouth you're talking to and being around people. The people that have been there since the beginning stick to their guns about what they're doing."

Debbie Mancini, general manager at the Plymouth, who has been around almost since the beginning, agrees. "We do what we do and we don't change it. Consistency makes things more comfortable. No bands, no DJs. Just good service, great food, a clean space, and reasonable prices."

Owner Mike Haggerty has been around since the beginning, when the Plymouth opened its doors in 1973. Back then, he says, downtown "was a lunch and happy hour place" and by "eight or nine o'clock, things were pretty quiet." The weeknight specials, which draw huge college crowds from all of Erie's universities, were originally intended just "to get people to come downtown after dark," according to Haggerty.

Although downtown after sundown has changed in the past 45 years, a couple of the more notable specials have not. The Monday quarter drafts were to get "people to show up for Monday Night Football rather than stay home out in the suburbs." Thursday dollar imports nights were meant to, quite simply, get his customers to try the imports. When I ask him how the Plymouth became regarded as a college bar, he tells me that "not much is by design. The point is to make everyone feel welcome. That's what the hospitality business is about."

"This is a meeting place. This is where you come to meet people, to be seen," Mancini explains. Whether you're seeking social camaraderie as a 21-year-old or a 52-year-old, the Plymouth shares a mutual function. The demographics shift by the hour of the evening or time of the year, but the joint is never devoid of enhanced moods, reduced tensions, and plenty of socialization.

"People like to be where other people are, in the bar business especially," Haggerty elaborates. "The colleges matured around us. Downtown made a bit of a comeback with the arena and the ballfield. There's a diverse group of people down here and they became our business population."

In short, the Plymouth became both a college bar and everyone's neighborhood bar by being itself. If the specials seem like a steal (especially the Wednesday half-off everything, an idea Haggerty and his late wife Barb lifted from State College), they kind of are. "Profit isn't always a motive. It's important to create an energy and get both the customers and employees into something fun," says Haggerty.

The word "energy" is echoed by Mancini and Gawlik, who see it manifested in both the bustle of the patronage and the chemistry of the staff. That's because any set of employees on a given night is accustomed to working with one another. "Same servers, same cooks, same door guys, same bar backs."

And at the end of the night, the same Plymouth.