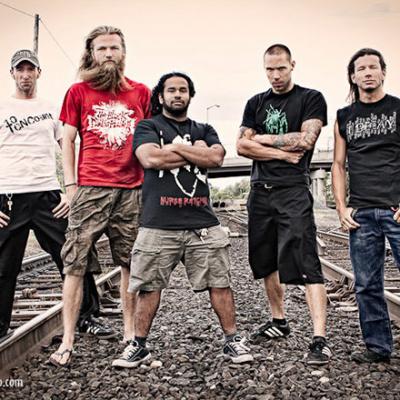 The self-proclaimed "Blue Collar Thrash Metal" group combines elements of thrash metal, melodic metal, and metalcore, to create a high energy, adrenaline-fueled experience that any metal fan can enjoy. The band formed in 2003, but didn't release their debut album *Push Pull Destroy* until 2010, which caught the attention of Metal Blade Records, one of the most prestigious record labels in the metal genre. The band has since released three more albums on the label, two of which peaked in the top five of the Heatseekers Albums chart. Their latest album, *Rise to Power, was released in 2015 and features the singles "Not Your Slave" and "Spoiled."

Touring with Battlecross are two other bands on Metal Blade's roster, Allegaeon and Necromancing the Stone. The two bands play distinct styles, opposite on the metal spectrum. Allegaeon is of extreme Death Metal/Grindcore persuasion, while Necromancing the Stone - in musical virtuosity, vocal style, and extensive track lengths - is comparable to 80s metal bands like Iron Maiden and Judas Priest.

Local opening acts for the night are Amavasya, Primal Scream Therapy, and Narwhal Bloodbath, all of whom exhibit massive talent, and are among the backbone of Erie's local metal scene. So come out and support these local and touring metal bands, bang your head, and have a good time. – Tommy Shannon