Beast Inspection: Beasts of Maravilla Island teems with imagination, but lean on experience 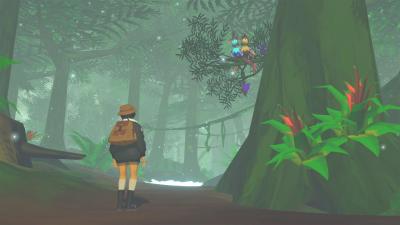 Pokédex full and feeling empty inside? If you're on the hunt for more fantastic beasts and want to know where to find them, charter yourself a boat to Maravilla Island, the site of Erie-based video game publisher Whitethorn Studios' latest release, aptly titled Beasts of Maravilla Island. Developed by Los Angeles-based indie developer Banana Bird Studios, the game follows in the wake of several recent entries to the burgeoning "photo safari" genre, most notably Nintendo's Pokémon Snap.

Players take control of budding wildlife photographer Marina Montez, who is on a mission to carry on her grandfather's legacy as an awestruck documentor of the natural world. At the heart of that legacy was his expedition to the uncharted Maravilla Island, home to an incredible breadth of hitherto undiscovered species. You'd have to see it to believe it — the problem is no one else had ever seen it, so his peers thought him a bit of a loon. So as Marina, you're doin' it for the 'Gramps — obsessively snapping photos of every living thing on the island to prove once and for all he wasn't off his 'noculars. But more than that, because you've inherited his spirit of curiosity and sense of wonder, and it just so happens the name of this island is wonder (in Spanish).

Armed with little more than your trusty camera, your grandfather's journal, and open mind, you'll set off to survey Maravilla Island's three distinct ecological zones, each with its own checklist of unique flora and fauna to photodocument before moving onward. Each zone has a featured creature with a set of characteristic behaviors to capture, which advance the plot and the path forward. The Banana Bird team was given access to several Natural History Museum of Los Angeles collections to help conceptualize the game's habitats and organisms, and it's clear they did their homework. The beast designs thoughtfully fuse elements of the extant, extinct, and mythical — at the same time vaguely familiar but also mystifyingly strange — lending a magicality to the visual experience.

The gameplay experience, however, is a bit less enchanting. The main culprit, ironically, is the camera — not Marina's (which never runs out of memory or batteries), but the "eye in the sky" that follows her — and I use the term "follow" loosely. It tends to wander at the same time you are wandering, to the point you'll often be wondering where in the Wonder Island you actually are. In third-person mode, you'll be regularly pulling the gameplay camera out of bushes and behind trees as if it were an ornery pup in the beginning stages of leash training. For that reason, it's less frustrating to stay in first-person mode as much as you can, which will also make identifying new species effortless (the heads-up display literally tells you when you're looking at something you've not looked at before).

Speaking of which, the vast majority are about as passive about being observed as you can possibly be without being dead — in most cases, you can waltz right up and snap a photo of them ("I'M SORRY, DOES THIS BOTHER YOU?!") without much of a reaction whatsoever. In a way, it's a return to Eden — when everything was cool and everything coexisted and no one cared whether they were on candid camera. In another way, it's like being a tourist in a museum rather than in a living environment. The gameplay prospers most when you get a chance to actually play a role within the ecosystem, helping the featured creatures accomplish their goals — e.g. whistling at binkeys (monkey-birds) to seduce them into shaking their tailfeathers to attract a mate, or parading pollinators to ripen glow-in-the-dark fruit to drop into an underground river for rave-ready otterdiles (otter-crocodiles).

All in all, Beast of Maravilla stands as a pleasant and imaginative diversion — after all, stress-free is Whitethorn's philosophy. You just have to wonder if it couldn't have been something more.

Beasts of Maravilla Island is available for download on Nintendo Switch and Steam (coming soon to Xbox One and PS4) for $9.99 // Rated 'E' for everyone