Beauty of a Beast

Sixth Barber Beast on the Bay aims to beguile, but battlers will not bow 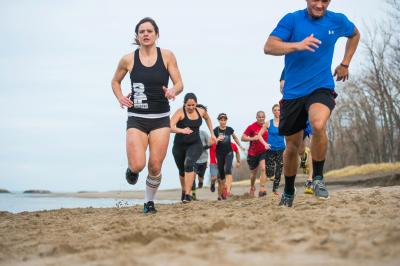 Believe it or not, there are such things as monsters. The Beast we are going to address today is neither hiding in your closet nor lurking beneath your bed; instead, it's splayed out audaciously along 10 miles of Presque Isle State Park trails, swamps, and beaches. Its scare tactics are openly advertised — 30 obstacles to navigate that will twist and test your frame in every which way. Unprepared, it might eat you alive — but the mad scientists behind it are encouraging would-be victims to implement a rigorous training and nutritional program, stretch, and drink plenty of fluids beforehand. All told, they want you to get out there and knock its teeth out for a great cause.
The Sixth Annual Barber Beast on the Bay returns this September, raising thousands of dollars to benefit children and adults living with physical, intellectual, and developmental challenges. The deviously-devised military-style main course begins at Beach 11, winding through the park's marshy interior and then back out along the coast, passing the Tom Ridge Environmental Center before ending in tandem with the 1-mile adapted course at Waldameer Park and Water World. The adapted course unfolds exclusively within the confines of the amusement park, with its last two obstacles — the "Beast Backbreaker" (with special needs participants helping their 10-mile counterparts up and over a wheelchair ramp) and the "Wave Goodbye" (a final push through the Water World wave pool) — uniting people of all ability levels, in line with the Barber National Institute's mission.

As for new additions to the lakeshore scramble, be on the lookout for four new obstacles favoring a more methodical approach: 1) "Are You Tire-d?" (a swing between suspended tire platforms); 2) "No Monkeying Around" (an upside-down, backwards shimmy clinging to the underside of a steel beam); 3) "Over-Under" (roll under and over a staggered set of elevated bars); and 4) "Walking the Plank" (a balance beam hanging on chains).

Competitors will go at the Beast in waves, starting promptly at 8:30 a.m. for those most eager to tame it, with secondary and tertiary timed waves setting off 10 and 20 minutes thereafter, respectively. Participants who want to attempt the course at a more leisurely pace will be able to do so between 9:15 and 11:15 a.m. Beat it up or test it out; just be aware it will be back next year. And the over 6,100 individuals served by the Barber Institute are thankful for it. — Matt Swanseger

Community
9/8/2018
Beach 11 at Presque Isle State Park, 1 Peninsula Dr, Erie, PA 16505
Get ready to unleash the Beast! 10 miles, 30 obstacles, 1 goal: the credo of the Barber Beast on the Bay, a one-of-a-kind obstacle course race that combines natural and manmade obstacles with a loc...
Beast On The BayErie EventPresque Isle State ParkBeast Backbreaker