Becoming Ghosts with The Faceless at BT 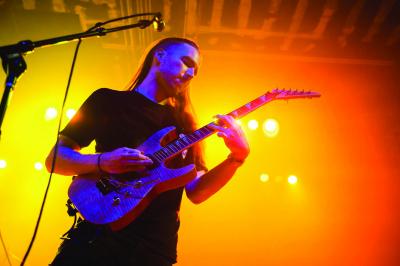 The Faceless are headlining a night of extreme metal at Basement Transmissions.

In 2017, The Faceless finally released their fourth studio album, In Becoming a Ghost, after making fans wait for half a decade following the release of 2012's Autotheism. After finding himself the last remaining member of the group (on two separate occasions), songwriter Michael Keene assembled a Los Angeles-based group to join him in touring across the country, and they are now coming to Erie.

In Becoming a Ghost highlights the band's technical proficiency, with lightning fast musicianship; and their creativity, with experimental and sometimes avant-garde songwriting structures, like the unexpected flute solo in the song "Digging The Grave."

Hailing from Austin, Texas, Rings of Saturn take the second spot on the bill. The progressive deathcore band humorously refers to themselves as "aliencore" due to their sci-fi themed lyrical content. The music video for "Margidda" shows the band playing on an alien planet alongside low budget, direct-to-video-esque extraterrestrials.

Other acts on the bill are deathcore bands The Last Ten Seconds of Life and Vale of Pnath, instrumental technical melodic death metal band Interloper (featuring two members of Rings of Saturn), and one of Erie's favorite death metal bands, Bravura. — Tommy Shannon

The Faceless, Rings of Saturn