Beer on the Bay Bookends Busy Month for Erie Brewing

Grab some pals — and some sunblock — and get on down to the area's premier beer bonanza. 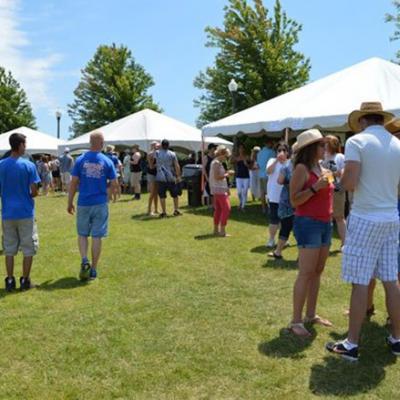 As if July could not get any busier for the Erie Brewing Company, Erie's most headline-grabbing brewery of the summer will be hosting Beer on the Bay in conjuctionwith the Erie Regional Chamber and Growth Partnership. Set against the glittering waters of Lake Erie under (and around) the recently renovated Highmark Amphitheater at Liberty Park, Beer on the Bay is in its 10th year and shows every sign of making its 2017 event the best yet, with over 50 brewers peddling their foamy wares.

Brew enthusiasts can purchase tickets for either the first session, from noon until 3 p.m. or the second session, from 4 until 7 p.m. General admission for the first session is $35; the second session is $40. For those who know they'll need a little sustenance to keep them going through three hours of sampling, Beer on the Bay offers VIP tickets for $50 and $55 (first and second sessions, respectively), which includes an expanded selection of beers for sampling, light appetizers, and even access to a hookah. (Designated Driver tickets are $25 and include VIP access.) Both sampling sessions will also get to enjoy the sounds of DangerBird throughout. If you like your beer with a side of goodwill, you'll be gratified to know that a portion of the proceeds will go toward The ANNA Shelter.

In addition to the breweries, dozens of food and merchandise vendors will be out in full force, including craft ice cream confectioner Northern Scoop, The Que Abides, amAURA Beads, Erie Apparel and Iron Empire Clothing. Guests are also invited to take advantage of the EMTA's free shuttle service to and from Liberty Park. Grab some pals — and some sunblock — and get on down to the area's premier beer bonanza. — Cara Suppa