Behind The Scene: Sex & Stereotypes

Sex sells. It shouldn?t. And it can?t overshadow talent-- especially our local talent. 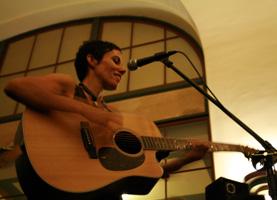 She isn?t the woman behind the ?great man.? She?s the woman behind the incredible music. And Erie?s female musicians take no prisoners. Last we met Behind The Scene, we examined the powerhouse of strength fueling their melodic endeavors. And we realized the simplicity of making noise with our own strings, skins, or cymbals. But what?s going to happen when the rest of the world hears the clamor?

A good wife should be seen and not heard.

Well, looks like you?re out of luck, buddy. Because a 100-watt amp cranks out quite a wall of sound. And, apparently, that?s pretty hot.

?You know how many guys have proposed to me just because I play guitar? It?s disgusting,? multi-instrumentalist Abby Barrett said with a Kodak-moment look of repulsion. ?It seems like it?s such a shock when a woman is a good musician. ?A woman can play guitar? Go make me a sandwich. Knit me a sweater. Be barefoot and pregnant in the kitchen.??

Barrett went on to describe a party where an impromptu performance of her guitar skills ended up on YouTube because the guy had never seen a girl play before.

Where the hell has he been?

Emily Johnson, a songwriter and guitarist new to the scene and still under18, put it quite succinctly, ?I think it goes way back to when [?] guys had the jobs, girls stayed at home. Basically, that hasn?t faded away. It?s still, ?I?m better than you because I?m a guy and I can play guitar.? And, ?You can?t skateboard because you?re wearing a bra.??

Johnson?s voice comes through quiet but determined, very much the same way she plays her music. She chooses to put herself in front of a crowd to overcome her anxiety.

Many women of the scene face such pressures from within, as well as pressures from what society and the media dictate as ?a woman?s place.? While other girls like Barrett have the balls to grab the guitar at a party and start churning out tunes, I?m usually the one watching the boys play, thinking of myself as an amateur, wishing I could just rock out one song around the campfire without being thought of as a lesser musician.

And that?s a bunch of bullshit.

?I think if society stopped allowing corporate media to control them, then what sells would radically transform,? said Katie Chriest of The Heliotropes. ?Every time we give money to media that promotes the notion that a woman?s role is to be in front of a band, looking a certain way, whether it?s buying that album, buying that magazine, or buying that DVD, we?re paying for the perpetuation of this line of thinking. Our dollar has a lot to say and the more we promote that original, from the heart kind of creation, on all levels, the more there?s going to be an understanding of what?s really important. And it?s not T and A, frankly.?

Music is creation born from emotion and sound, not the uterus, or whatever anatomical part you may be looking at. But before I go making every local musician with a penis look like a chauvinist, I?d like to mention the man who got me on the stage ? Matt Boland of the Dirty Pickles. When I kept feeding him excuses for not participating in open mic, he gave me this valuable piece of advice, ?Stop practicing and start playing.?

In fact, all of the Dirty Pickles look out for us gals. Not to mention Fred Krugger and Bob Jensen of Jargonauts, Steve Trohoske and Ian Smith of Is What It Is and a host of others. But we can talk about the opinions of these guys and the rest of the people who matter in the next issue.

In the meantime, those of you who are more concerned about what?s under a girl?s skirt than what?s on her mind, don?t expect dinner to be on the table when you get home from work. She?s got a gig tonight.