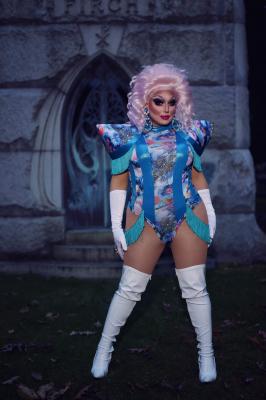 Sarah Peach
Tom Widdowson, alias Rebecca Mae, has enjoyed tremendous success with his bimonthly drag brunches. This time, he will be joined by Vegas entertainer London Adour at the Bourbon Barrel.

Brunch is officially "a thing" in Erie, and no one is mad about it. Whether you're hitting up the fine fare at Cloud 9, trying something new and exciting at Proof Kitchen, or grabbing a tasty craft beer along with your grub at Lavery's, Sunday mornings are suddenly worth waking up for.

But while your brunch buddies might have some stimulating conversation to share over that plate of waffles, we guarantee they will not entertain you like Rebecca Mae and her coterie of be-sequined friends, coming at you every other month for almost a year now.

Tom Widdowson, the talent and driving force behind Rebecca Mae and her first-in-Erie drag brunches, remarked, "September's brunch was fantastic. Everyone was so happy, and the vibe was great."

Widdowson sighed as he recalled how a few "weird things" occurred at his last event, stating, "I'm a perfectionist. No one else noticed these things … but I did."

His perfectionism and self-learned business acumen are not only earning him ticket sales from curious guests who are checking out something new to do in Erie, but — perhaps even more important — repeat guests and loyal fans. These brunches are, after all, selling out, and a quick glance at Rebecca Mae's Drag Brunch Facebook page shows glowing review after glowing review, many of which express an excitement to return for the next.

And speaking of the next, "[We're] going to have a special guests all the way from Las Vegas."

Joining London, of course, Rebecca Mae will take the stage at the Bourbon Barrel downtown, along with her house cast, which includes Siren Kelly, Evon Michelle, and Erie's own Michelle Michaels, all three of whom have performed at every single show since the drag brunch's inception.

"We have sponsors again for this brunch," Widdowson was quick to point out. He cited Lucky Louie's, A Cut Above by Nina Ferrare, Reeves Plumbing & Heating, and Presque Isle Printing as contributors to the November show.

"Sponsors are more important than ever," he emphasized. This is because, as the brunches continue on their upward arc of success, Widdowson is looking to bring in even more famous (and expensive) talent — like, say, a drag queen contestant from RuPaul's Drag Race.

"Expect to see her at the January 27 show," was Widdowson's only teaser. He won't be revealing her name until the November event, so those who attend will be the first to know.

It's hard to believe it has been less than a year since Rebecca Mae's first drag brunch, but it is something to see the community embrace, in such short order, the joyful celebration of color, glamour and inclusivity that Widdowson is working hard, every day, to champion in the Gem City. — Cara Suppa