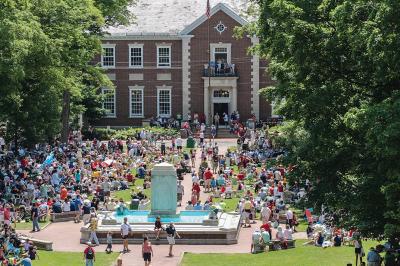 The summer season at the Chautauqua Institution begins this Saturday, June 27 and runs through August 30.

There are some big names and great events headed to the region. Week One at the Chautauqua Institution stacks up like this:

Morning: David Von Drehle has written more than 160 articles for Time magazine, including the April 2015 cover feature, "The Roots of Baltimore's Riots," exploring what has and hasn't changed in the city since the riots of 1968.

Afternoon: Meryl Justin Chertoff is executive director of The Aspen Institute's Justice and Society Program and adjunct professor of law at Georgetown University Law Center. She is the author of the Aspen Report on the Principled Pluralism Project.

Evening: At 8:15 p.m. Monday, June 29, acclaimed journalists Charlie Rose and Nancy Gibbs will discuss their storied careers in a special evening program. Rose is an award-winning broadcast journalist who is an anchor of "CBS This Morning," a contributor to "60 Minutes" and executive editor and host of "Charlie Rose," the daily hourlong interview program on PBS. In this event, Rose will be interviewed by Gibbs, managing editor of Time magazine,where she oversees the domestic, international and tablet editions of the magazine, Time.com, Time Mobile and Time for Kids.

Morning: Roger Rosenblatt is a renowned memoirist, essayist, playwright and professor who has served as a columnist and essayist for The Washington Post, Time and "PBS NewsHour." He has written five off-broadway plays and 14 books, five of which have been Chautauqua Literary and Scientific Circle selections.

Afternoon: Stephen Prothero is a professor in the Department of Religion at Boston University and the author of numerous books, most recently The American Bible: How Our Words Unite, Divide, and Define a Nation. He has commented on religion on dozens of National Public Radio programs, and on television. In 2010 he was invited to speak about religious literacy at the White House.

Evening: Chautauqua will host a live taping of NPR's "From the Top," with host Christopher O'Riley, on Tuesday evening. "From the Top" has been the pre-eminent showcase for America's best young musicians for the past decade.

Morning: Mae Jemison is a former NASA astronaut, doctor, engineer, academic and entrepreneur. She is a strong voice for science literacy. In 1994 she founded the international science camp The Earth We Share for students 12 to 16 years old, a program of the nonprofit Dorothy Jemison Foundation for Excellence.

Afternoon: Marc Saperstein currently serves as professor of Jewish history and homiletics at Leo Baeck College and professor of Jewish studies at King's College London. Recognized as one of the pre-eminent authorities on the history of Jewish preaching, he is the author of six books including, Decoding the Rabbis: A Thirteenth-Century Commentary on the Aggadah (1980) and Jewish Teaching in Times of War 1800–2001 (2008).

Evening: On Wednesday, classical guitarist Sharon Isbin will give an 8:15 p.m. performance. Isbin is a multiple Grammy award-winning musician acclaimed for her lyricism, technique and versatility.

Morning: John Hope Bryant is founder, chairman and CEO of Operation HOPE, an organization that works to improve under-served communities across the U.S. and invests in financial literacy programs and financial dignity education around the world. An entrepreneur since the age of 10, Bryant is today responsible for more than $1.5 billion of private capital supporting low-wealth home ownership, small businesses, entrepreneurship and community development investments.

Afternoon: Eboo Patel is the founder and president of Interfaith Youth Core (IFYC), a Chicago-based organization building the interfaith movement on college campuses. He has served on President Obama's inaugural Advisory Council of the White House Office of Faith-based and Neighborhood Partnerships.

Evening: Chautauqua's resident artistic programs take the stage on Thursday and Friday. First, the Chautauqua Symphony Orchestra celebrates the opening of its 2015 season, the first with new music director Rossen Milanov, on Thursday, in a performance featuring pianist Alexander Gavrylyuk. Showcasing dancers from the resident Charlotte Ballet, Chautauqua Dance makes its 2015 debut on Friday with the annual Chautauqua Dance Salon, under the direction of associate artistic director Mark Diamond.

Morning: Kay Bailey Hutchison is a business woman, public servant and a former Texas Senator with more than 40 years of experience in the public and private sectors. She is the first woman to serve Texas in the Senate. Hutchison currently serves as senior counsel at Bracewell & Giuliani LLP.

Afternoon: Christopher Leighton is an ordained Presbyterian minister who has served as the Executive Director of the Institute for Christian & Jewish Studies since its inception in 1987. In October 2014 the board of the ICJS elected to expand the educational mission to include Islam. He is now actively developing and implementing programs that bring Christians, Jews and Muslims into a serious and sustained exploration of their sacred texts and traditions.

Evening: Chautauqua's resident artistic programs take the stage on Thursday and Friday. First, the Chautauqua Symphony Orchestra celebrates the opening of its 2015 season, the first with new music director Rossen Milanov, on Thursday, in a performance featuring pianist Alexander Gavrylyuk. Showcasing dancers from the resident Charlotte Ballet, Chautauqua Dance makes its 2015 debut on Friday with the annual Chautauqua Dance Salon, under the direction of associate artistic director Mark Diamond.

Also on Friday, Chautauqua Theater Company opens its 2015 season with a preview performance of Thornton Wilder's American classic Our Town, at 8 p.m. Friday in Bratton Theater.