Blood is Thicker Than Water: Da 5 Bloods is Ambitious, Engrossing, and Overwhelming 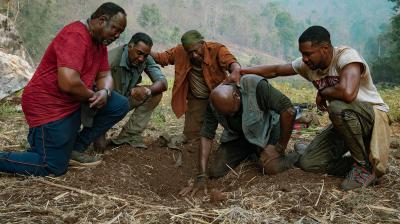 In his new film Da 5 Bloods, Spike Lee makes the brilliant decision to film the war flashback scenes using the older actors without any digital de-aging. Watching them interact with their much younger comrades makes a powerful statement that while some men got to grow old and look back on the war, others never had that chance. This is just one detail among the myriad of ideas presented in this film, which often seems to be firing in five directions at once. The result is sometimes sloppy, occasionally ham-fisted, but just as often emotionally stirring.

The plot follows four veterans who return to Vietnam to find the remains of their fallen friend as well as a buried chest of gold bars that got lost in the heat of battle. Things go bad for these old friends as other parties become aware of the treasure and internal tensions begin to tear the group apart.

The film is at its best when dealing with the characters' internal drama. Watching how these men have dealt with the scars of living through two wars that never really had satisfying ends (both Vietnam and Civil Rights) is powerful stuff and the performances are more than up to the task. However, when the film becomes more of an action movie in the second half it suffers. Big action set-pieces were never Lee's strong suit and the action doesn't mesh well with what has come before. Lee has a lot of big ideas with this film, a production that often wears its emotions on its sleeves. Some might find that melodramatic, but I'm happy when films are willing to be this ambitious and emotionally open, even if it doesn't work all the time. Da 5 Bloods is currently available on Netflix.