Blood-Spattered Bride: Ready or Not is Flawed But Fun

A premise so wild and ridiculous, but nearly impossible to hate 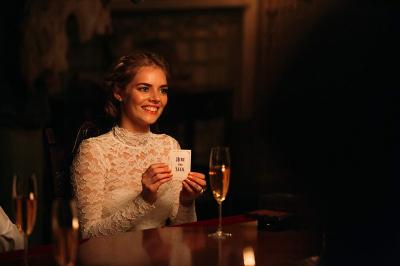 F. Scott Fitzgerald once said that the rich "are different from you and me," and I think the makers of the new horror/thriller/comedy Ready or Not had that quote firmly in mind when they made their film. Ready or Not takes its completely silly premise and runs with it in such wild and ridiculous ways that it becomes nearly impossible to hate.

It's Grace's (Samara Weaving) wedding day and she is about to be married to Alex Le Domas (Mark O'Brien), the heir to the Le Domas board game empire. Everything seems perfect until night falls and Grace is told that she must partake in a family tradition of playing a game for the night. Grace soon finds herself playing hide and seek against this bizarre family and what she thought was a fun little game is soon revealed to be something far more deadly.

It sounds like a horror premise, but Ready or Not plays much more like a dark comedy. With cheesy one-liners and performances that are just the right amount of hammy, the film clearly has its tongue firmly in cheek. There are some plot contrivances and some character motivations don't make a lot of sense near the end, but it doesn't matter because everything is building up to an absolutely bonkers ending. The finale is so disgustingly over-the-top that any flaws the movie had are immediately forgiven. I don't want to spoil too much, so just let this film take you on its twisted, demented journey. — Forest Taylor