Blues and Jazz Festival: Past and Future

Was it a rags to riches story? What's the future hold for the Fest? Cory Vaillancourt got some answers. 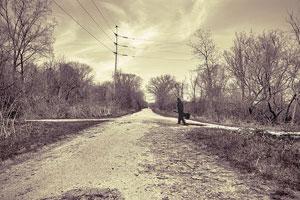 The present always stands at the crossroads of the future and the past. This year's festival is the 19th Erie Blues and Jazz Festival. "Last year's festival was the biggest we've ever had; we had 20,000 people come, so I think the word is getting out there," says Eller.

But stunning success was not always the case. When it started all those years ago, it was small and boring and stupid and nobody came and it struggled and it fought and it persisted and it grew into the major attraction that it is today.

Actually, that's completely wrong. John Vanco tells me that this event has been popular since the very first year and there's no "rags to riches" story here.

Cory Vaillancourt: How has this festival grown over the years?

John Vanco: The number of people has grown every year. It's been very consistent that way. I would say it's grown in terms of public recognition, although the festival was an immediate success.

CV: Damn. That stuff sells papers. Even free ones like the Erie Reader.

JV: The first year we did it was really Tim Spiegel, a local realtor…it was his idea. He came to me because I'd been presenting jazz, at that point, for 10 years or more. He said, "Let's do a festival, and I'll help you get some sponsors." He was very helpful the first few years. And we did it [in] one day, just a Sunday event, and it was so successful [that] it was beyond our expectations, how many people showed up, and the whole thing. The second year we made it two days, and we've kept it two days ever since.

The foundation of consistent success that has defined the Erie Art Museum Blues and Jazz Festival over almost two decades makes me wonder what the future might hold for this festival. I talked with Vanco a little more after the Erie Art Museum press conference to find out.

CV: What's the future of this event? With the success of it, would you ever consider changing the venue or expanding the event to four or five days?

JV: We've thought about increasing it, actually, to more than two days, but until we get more sponsorship, that's not going to happen.

I wouldn't change the venue. I think the venue's such a good match for the event. People have frequently suggested that we consider Liberty Park. And Liberty park is a beautiful setting, and it's great if the wind isn't blowing. But if there's any kind of breeze down there you can't hear the music. It gets all blown around.

We've never had a problem with that at Frontier. We've always had great sound there. And, we have a relationship with the city and the arboretum as well, and it works to all our advantage to keep it in that location.