Book Review: Culture Warlords: My Journey into the Dark Web of White Supremacy 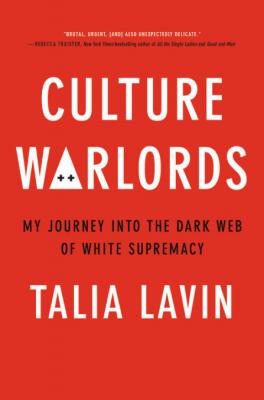 Twenty-something Ashlynn was having trouble finding love in her small Iowa town. She wanted a man who shared her affection for firearms and her fears about white genocide. As a beautiful blonde on a racist chat forum, she soon met David, a lonely Ukrainian Nazi assembling a small militia thousands of miles away.

But there's a catch. "Ashlynn" is actually Talia Lavin, a bisexual, Jewish leftist embodying everything David loathes about the world. Ashlynn is one of several online disguises adopted by Lavin for  Culture Warlords, a book dedicated to examining (and unveiling) the most deranged people on the Internet. The text reads as a cautionary primer to the most dangerous online reactionaries, profiling incels (aka "involuntary celibates"), Boogaloo Boys, far-right accelerationists, and the Ku Klux Klan.

If you've spent the past four years watching — horrified and bewildered — as Nazis gather in Charlottesville and insurrectionists parade through the Capitol building with Confederate flags, Lavin's book will help you understand the nightmare world we're living in. It's equal parts history, memoir and call-to-action, with the latter two making the strongest impression.

Lavin's first-person voice makes her case urgent and readable, but her scope is occasionally too limited to the 21st century. There are informative asides about New Deal-era antisemites like Henry Ford and Father Charles Coughlin, but I found myself wanting a clearer sense of the lineage that led up to the present. And her confessional style, relying primarily on her direct experiences as a Jewish woman, occasionally forces issues like Islamophobia (one of our most overtly normalized forms of bigotry) to the book's periphery.

That said, Lavin's fearless plunge into hateful subcultures is impressive and informative. There's a chapter devoted to infighting between racist Christians and Pagan Odinists that is as hilariously insular as it is objectively terrifying. Prior to 2016, many of these groups may have seemed like isolated curiosities more deserving of a short article than a full book. But as we (hopefully) conclude an era where overt bigots like Stephen Miller, Sebastian Gorka, and Steve Bannon all had direct access to the president, the book feels vital and necessary.