Newest from Riley Sager promises thrills at every turn 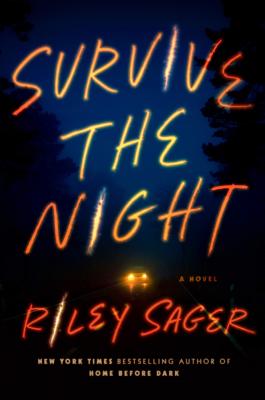 Scene: two strangers driving through the night on a deserted highway in 1991. Charlie, a college student and movie fanatic needing a ride home to Ohio, and Josh, a mysterious stranger who has offered her a ride — but who might also be a serial killer.

This is the premise of the new novel Survive the Night from Riley Sager, an author often praised as a modern master of suspense. Following the success of 2020's Home Before Dark, Sager follows with what can best be described as a horror film on paper.

Charlie is reeling after her best friend was murdered by a serial killer dubbed the Campus Killer, something she feels she could have prevented. After being put on medication to deal with the guilt she feels, Charlie realizes that the "movies" that play back in her head are gradually fading away, leaving her feeling even worse. In an effort to push past, she stops taking these medications to allow the movies to return and decides to head off campus and back home.

Posting notice of needing a ride to her hometown in Ohio, Charlie meets Josh, a charismatic stranger who offers to drive her overnight. In an era before cell phones, the internet, and sometimes common sense, Charlie accepts the ride and gets into a car with a complete stranger. When she discovers that this stranger isn't telling the truth — and may be closer to her best friend's murder than she realizes — it is a race against time to figure out what is real and what is just part of the movies in her head, and what this stranger wants with her.

Living up to his well-earned reputation, Sager has written an excellent, edge-of-your-seat novel that has surprises at every turn, leaving readers scrambling to the end to know the answer to one question: will Charlie survive the night? — Ally Kutz