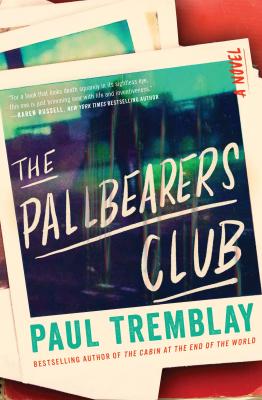 At 17 years old in the late 1980s, Art Barbara was not cool. As a high school loner who listened to hair metal and was stuck in a back brace at night for his scoliosis, he started a volunteer-based club assembling pallbearers for poorly attended funerals.

But then he makes a new friend — who just so happens to be the coolest girl he's ever met. She is fascinated by The Pallbearers Club and decides to tag along, with her Polaroid camera to take pictures — of the corpses. This isn't the only strange thing about her, though — aside from her obsession with New England folklore involving digging up the dead, there are a lot of other bizarre and terrifying things that happen whenever she's around.

Now, decades later, Art finds himself trying to understand everything that transpired in those teen years by writing it all down in The Pallbearers Club: A Memoir. But just as things start to make sense, his old friend reappears and somehow gets her hands on this manuscript, taking issue with some of what is written and begins making cuts and corrections.

It is clear from the start that this is not your average psychological thriller. Truly, it is difficult to pigeonhole this novel as one specific genre, as it encapsulates qualities from many distinctly different areas of writing. Blurring the lines between fiction and memory, supernatural and ordinary, Paul Tremblay's latest work is nothing short of enthralling.

Written from the beginning in the style of Art's memoir and featuring footnotes and other writings throughout, Tremblay takes you on a journey not as a second- or third-hand witness, but instead as though you have just picked up the manuscript, ready and waiting for your review. — Ally Kutz