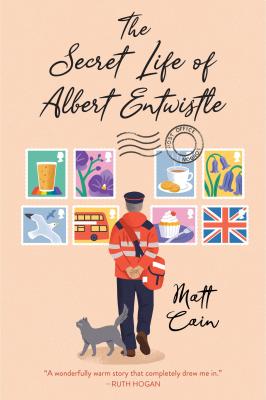 There isn't much anyone would be able to tell you about Albert Entwistle: as an extremely private man, his neighbors and colleagues can't say anything with certainty about him, except that he's a postman.

At least he was a postman, until the Royal Mail sent him a letter thanking him for his service while simultaneously forcing him into retirement by his 65th birthday. Now, Albert has no clue what to do — his life has revolved around being a postman for almost 50 years. After some thought, he creates a plan to start living life rather than watch it pass him by.

In Matt Cain's The Secret Life of Albert Entwistle, Albert's determination to start living his life leads him on a whirlwind journey to come to terms with the past to create a better future for himself. He realizes that in order to be happy, he must be honest about who he is with those around him. He also realizes that his happiness hinges on finding George, the man he loved and lost almost 50 years ago.

With that mission always at the foreground, Albert finds himself in places he's never been — from the gay club scene in Manchester to a drag show in London — with people he'd never expect. As he slowly begins to emerge from the barrier he's built around himself all these years, he finds unlikely allies and new friends, the most important being Nicole, a 19-year-old single mother who lived on one of Albert's post routes.

Together, Albert and Nicole set out to find George, but help each other in more ways than on the surface. While Nicole helps Albert grow more comfortable in social situations and opening up to people, Albert helps Nicole realize her worth both professionally and personally.

Cain's writing is nothing short of spectacular. Perhaps it is the story, the scene, or Albert himself, but everything in this novel works so wonderfully well together that readers will be absolutely spellbound by it. Traveling alongside Albert as he becomes his true self seems a privilege that Cain has graciously shared with us.

Cain has brought to life the quiet, ordinary man and makes him into an extraordinary example of what we should all strive for — not simply living for the sake of it, but really participating and enjoying our lives. No matter how big or small a part they play in Albert's life, each character is crafted with such excellent detail in their quirks and qualities that it is difficult not to imagine them right in front of you.

This novel is an absolute triumph for Cain, as both he and Albert prove that it's never too late to change, to grow, to live, to hope, and to love. — Ally Kutz