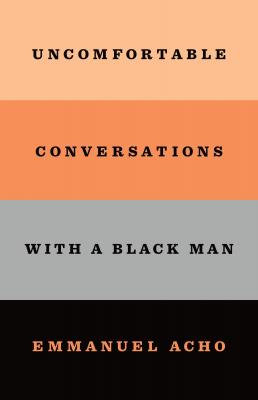 In the summer of 2020, former Philadelphia Eagles linebacker and current Fox Sports analyst Emmanuel Acho began a YouTube series of videos titled "Uncomfortable Conversations with a Black Man." Following the success of these videos, he penned the book of the same name, released in November 2020.

After the 2020 murder of George Floyd perpetrated by a Minneapolis police officer, a resurgence of the Black Lives Matter movement occurred, with protests taking place worldwide that called for the dismantling and restructuring of the racist system that allows for the oppression and mistreatment of persons of color in this country. In a time when it is imperative to not just be "not racist," but instead anti-racist, many white people may feel apprehensive and nervous, unsure of what the road to a true alliance looks like. What if you say the wrong thing? What if your privilege gets in the way? What if you are just virtue signaling instead of actually helping? These apprehensions can lead many to not want to get involved, leading to the unintentional support — but support nonetheless — of the systemic racism that allows little to no repercussions for those perpetrating these crimes against persons of color.

Uncomfortable Conversations with a Black Man addresses these apprehensions many white people may have. The key lesson in Acho's book: you will mess up. Every single white person who genuinely wants to be an ally will make mistakes, say the wrong thing, do something unintentionally wrong. But the most important takeaway is to learn from these mistakes instead of continuing to make them; to actively understand why what you are doing is wrong and learn from it.

Acho addresses topics that range from the debate between using Black or African American and the myth of the "angry black man" to the more technical topics of systemic racism and racism in relation to our government. The book is split into three sections: "You and Me," "Us and Them," and "We." The first two sections address topics that separate whites from persons of color in America, with the final section addressing ways in which white allies can come together with persons of color to bring about systemic change — chapters in this section include "The Interracial Family," "How to Be an Ally," and "How to End Racism."

Each chapter introduces its topic, gives its history (Let's Rewind), talks about the problematic aspects and how they apply to everyday life (Let's Get Uncomfortable), and practical solutions to take with you (Talk It, Walk It). Acho's writing is concise and to the point while also not being too technical to the point of alienation of readers. It reads more like a conversation (hence the title) while simultaneously acting as an introductory how-to guide, proving Acho's abilities as both a writer and educator. At just 30 years old, Acho has solidified himself as one of the exemplary voices of his generation.

Acho's companion book geared toward teaching children about systemic racism, Uncomfortable Conversations with a Black Boy, is set to be released in May 2021.

by Ally Kutz6/8/2022, 3:00 PM
Medieval play explores the meaning of life in this contemporary adaptation