The strange fate of the Philadelphia World's Fair 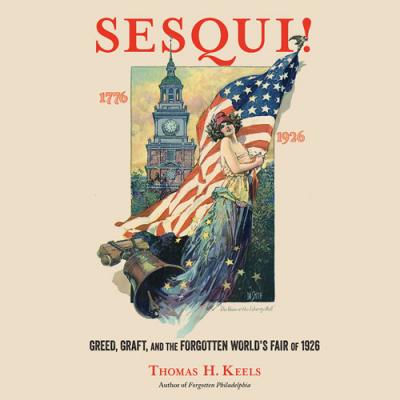 Thomas H. Keels' new book Sesqui!: Greed, Graft and the Forgotten World's Fair of 1926 answers the question, "What if Philadelphia hosted a world's fair and no one came?"

But they were expecting 30 million.

Sesqui! recounts this flopped historical event, from the humble dream of a local merchant wanting to showcase his city to the world, to civic leaders blinded by hubris, to the final project being hijacked by the corrupt political machine that ran Philadelphia, sealing its doom and plunging the city into massive debt for decades afterwards.

Philadelphia department store visionary and philanthropist John Wanamaker had a simple idea: Host a world's fair in 1926 to showcase the 150th signing of the Declaration of Independence. This sesquicentennial would bring visitors from around the world to witness new and different cultures, inventions, and major sporting events.

Then the Fates intervened.

Wanamaker, the chief and only real proponent for the "Sesqui," died in 1922. As time ticked away toward 1926, plans for the event weren't faring much better than Wanamaker: off, then on, then off, then on again, but unclear. While there was never much civic interest in hosting such an event, city leaders finally proceeded with the blessing of the "Duke of South Philadelphia," William S. Vare, a construction contractor and politico, whose "Organization" ran the city.

After haphazard planning, earnest construction for the Sesqui began in 1925, at a hard-to-reach South Philadelphia location that had formerly been swampland (not coincidentally under Vare's bailiwick).

First visitors found workmen unloading curios in some exhibition halls while other buildings and monuments were under construction. The main gateway to the festival featured an 80-foot tall Liberty Bell that served as the Sesqui's symbol. Adorned with 26,000 lights, the bell itself was complete – yet its supporting stanchions were still encased in wooden scaffolding.

Visitors seeking the Tower of Light – a 175-foot Art Deco pillar that was to be the event's highest structure, equipped with the world's largest searchlight termed "The Light of Independence," capable of shining light 70 miles away – had to be disappointed. According to Keels, "When visitors asked Sesqui police where they could find this wonder, they were directed to five large holes dug for its foundation between the two main palaces."

Poor word-of-mouth followed. And one of the rainiest periods in Quaker City's history further damned the event to failure and financial disaster.

Keels' well-documented tome recalls Sesqui's attempted grandeur, its few high points (it hosted the classic boxing match between Jack Dempsey and Gene Tunney), and its many low points. The author then proceeds to recount Sesqui's failed financial aftereffects, reducing the city's once-proud reputation as "Workshop of the World" to a squalid Third World burg, to its phoenix-like resurrection of today. In 2015, UNESCO named Philadelphia the first World Heritage City in the U.S., "putting it in the same league as Jerusalem, Prague, and Paris."

Yet with Sesqui all but forgotten, and a semiquincentennial for 2026 in the works, Keels, an apt historian, appears to caution its organizers in Sesqui's final sentence: "Dear God do people learn nothing from the past?" – Gregory Greenleaf-Knepp