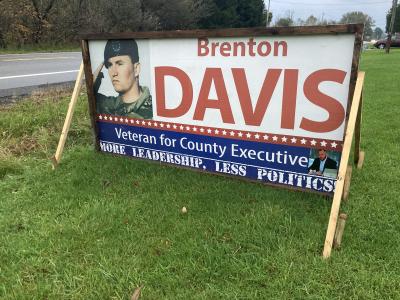 In an article published by the Erie Times-News on Thursday, Oct. 21, numerous differences were cited between Brenton Davis' actual military record and claims he has made both in public and via social media.

Now, many of those claims have been called into question, by both the media and former veterans alike.

In a press release from Jay Breneman and Dorthy Butala voiced their distaste for Davis' mischaracterization of his service, calling it "stolen valor." Both Butala and Brenemen are awarded veterans of the Iraq war. Breneman, a former Erie County Council member, is an outspoken Democrat and has long been critical of Davis via social media.

"​Mr. Davis has, for more than a decade, aggrandized his service, claiming to be a veteran of both the war in Iraq, and the war in Afghanistan. We now know that his claims were fraudulent. While he did serve on active duty during a time of war, his shoes were never 'caked with the sand of the Middle East' and he did not 'came home from Iraq in 2005,' as he publicly and repeatedly claimed on social media and in his business profiles, because he never served in Iraq or Afghanistan."

According to military records uncovered by the Erie Times-News, Davis enlisted in the U.S. Navy and began serving in 2001. He was assigned to the U.S.S. Kitty Hawk, an air craft carrier near. In 2003, he was deployed to the Persian Gulf, marking the only time in a combat zone during his career.

Davis' discharge from the Navy does not indicate that he was personally involved in any combat, based on any decorations awarded.

After serving in the Navy, Davis served as an Infantry Officer in the U.S. Army National Guard and later joined the U.S. Army Reserve.

According to records, Davis was never deployed to Iraq, Afghanistan, or other combat zones while in the Army Reserve.

This information goes against things that Davis has said in public, to the media, on social media, and on his business' website.

Note: This is a developing story with more information likely to follow.