Water is the host with the most 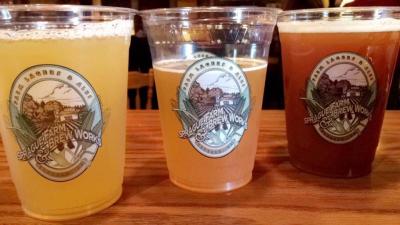 Of all ingredients in beer, "water is the most important," according to Brian Sprague of Sprague Farm and Brew Works. Good old-fashioned H20 constitutes at least 90 percent of the finished product and it affects everything on the atomic level. A higher concentration of calcium ions will lower water's pH (hardness), while more bicarbonates will raise the water's pH (alkalinity). Sulfates accentuate a beer's drier, more bitter, or "hoppier" characteristics, while chloride ions round out a beer's sweeter or "maltier"aspects.

In the olden days, the water just outside your brewery was all you had — thus certain beer styles became distinctly associated with specific regions. For example, the soft, relatively mineral-free water of Zatec (in the modern-day Czech Republic) best communicates the crispness of the pilsner style, while the hard, mineral-laden water of Ireland best conveys the richness of a stout. The aquifer Sprague's pulls from outputs something akin to Munich's water profile, which presents slightly harder. This is especially conducive to medium-bodied to darker lager styles such as Dunkel, Doppelbock, or Märzen (aka Oktoberfest).

Today's brewers are not restricted in the same way, say, a Franciscan monk of the 15th century would've been because of a process called reverse osmosis, which filters the minerals away for a clean template. Minerals such as gypsum, table salt, and even chalk are then added back in varying ratios to essentially mimic the water profile of anywhere in the world.

Grain — typically barley but sometimes wheat, oats, or rye (or adjuncts like rice or corn as cost-cutting measure) — is the second most prominent ingredient in beer. Through the malting and kilning processes, various shades of malt with differing levels of toastiness and roastiness are produced to give a beer its color and body. Europe, Canada, and the Western U.S. (North Dakota being the top-producing state) grow the bulk of the world's barley, but demand for locally-sourced ingredients has increased considerably with the craft beer boom of the past two decades. In neighboring New York, laws are actually in place to incentivize using local grain.

Sprague Farm grows a spring variety of six-row malting barley, adapted for shorter seasons and higher yields (two-row barley is predominantly grown in Europe). Although Northwest Pennsylvania generally provides the cooler ground temperatures barley thrives in, its precipitation situation can be persnickety. It favors full sun with some rainy interludes — as we are well aware, this area favors the opposite pattern. Death-row barley is the worst kind for beermaking.

Hops, we cone not do without you

Pardon your fragile masculinity, but female hop cones are the only ones that matter (in context of "seasoning" a beer — male hop cones are vital for breeding more female hop cones). Hops add contrast to malt in the form of bitterness, prevent spoilage, and contribute aroma and flavor notes of their own. Hops grow on flexible stems called bines, which wrap around and climb vertical supports such as fences, trellises, ropes, or poles.

There are dozens of varieties of hops, broadly classified by their intended function: bittering (added earlier in the boil) or aroma (added late in the boil). Some, of course, are versatile enough to serve either purpose. The so-called Noble hops — Saaz, Hallertau, Tettnanger, and Spalt being the Big Four — are behind the blueprints of many of Europe's most iconic beers and showcase floral and spicy characters. Fuggles and Goldings are key English varieties (and sound like they co-authored a paper on ornithology together), while Cascade, Centennial, and Chinook have long stood at the forefront of America's craft beer frontier.

Local homebrewers have had good success with Cascade in Northwestern Pennsylvania, as has Sprague. It has a distinctive citrusy grapefruit flavor recognizable in many pale ales and India pale ales (IPAs), although it lends itself to a breadth of styles. Sprague's also cultivates Magnum (popular bittering variety), Nugget (a hearty and prolific grower with broad applicability), and Mt. Hood (a U.S. answer to the Noble Hallertau) while fighting menaces like Japanese beetles and powdery mildew (another byproduct of too much wetness). Harvest was completed in late August.

Yeast makes the magic happen; it converts sugars into alcohol, allowing you to get the party started. Ale yeast is spriest at warmer temperatures and is top-fermenting, meaning it catalyzes the reaction at the top of the wort (syrupy pre-beer). Lager yeast works slower and at cooler temperatures. It started at the bottom, now it's beer.