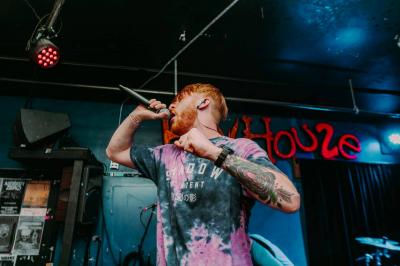 Wearing raunchy short-shorts and armed with genre-subverting innuendo, Brojob will be stopping by Basement Transmissions as they embark on its latest tour. As suggested by the name of this outing, "The Massive Balls Tour," the group is equal parts serious deathcore band and stereotype-defying meme that is sure to offend some and enthrall others. Brojob's releases include full-length album Talk Sh*t Get Kissed in January 2018, and single "F**k Yourself" featuring CJ McCreery (formerly of Lorna Shore) this past September. Their song titles almost explain the group's sense of humor and unique aesthetic on their own, with other attention-grabbing track names like "We Are The Boyfriend Stealers" and "Goth is the New Black."

Joining Brojob for all dates of this tour are Hunt the Dinosaur and Left to Suffer. Hunt the Dinosaur's debut full-length album Dankosaurus dropped over the summer after a long wait. A notable music video in its repertoire is a recent remake of their 2014 track "Destructo," which features punchy, rhythmic vocals and speed screams with thumping deathcore instrumentals. Left to Suffer is self-described "Nu-Deathcore" from Atlanta, having arrived on the scene only last spring with its hard and heavy debut single "Burden." Its most recent release is single "No Hope" from this past November, and its Facebook page has been frequently teasing even more new material over the last few weeks.

Local support for the show at Basement Transmissions includes Perdition, Narwhal Bloodbath, and Inertia. Perdition brings 10 years of Erie-based symphonic death metal to the table. Creative metal players Narwhal Bloodbath of Bradford, Pa. feature a diverse set of influences in its inventive brand of technical metalcore. Buffalo-based Inertia plays progressive metal with a brand of instrumental gymnastics that could almost stand alone as its own genre.