Celebrate A Local Tradition at Erie's Blues and Jazz Festival 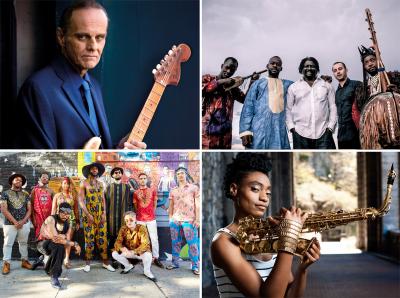 Erie residents will soon be treated to one of the community's longest-standing arts events: the annual Blues and Jazz Festival. In addition to the mainstage lineup that begins Saturday afternoon, the weekend (starting Friday afternoon) will feature family-friendly entertainment from artist groups including the Erie Dance Consortium and the Northwestern Pennsylvania Artists Association. An artist market including visual art demonstrations will be open to the public, as well as a "Sustainability Village" arranged to promote eco-friendly business practices. There will be three chances to catch a performance from the National Marionette Theatre that day. Friday will cap off with a presentation of E.T. the Extra-Terrestrial as part of the Movies Under the Stars program. A number of local food trucks are also set to cater to attendees as well.

2 p.m. The Division Street Machine - The festival's mainstage musical performances kick off with a groove-oriented set from the blues, funk, and jam band, mixing covers with original songs.

6 p.m. Walter Trout - The accomplished Huntington Beach, Calif. guitarist is scheduled to perform Saturday night's headlining spot. In 2013, he released his very first covers album, titled Luther Allison's Blues. Twenty-two records into his storied career, the former Canned Heat axeman has earned a nod as "the world's greatest rock guitarist," as well as the No. 6 spot on BBC Radio One's list of the "Top 20 Guitarists of All Time."

8 p.m. BKO Quintet – The West African band will close out Saturday's festivities with an energetic set comprised of modern takes on traditional Malian music, "associating the guitar of griots with the lute of Bambara hunters."

12 p.m. Jim Madden and Friends – The veteran keyboard player and his band will open Sunday's musical performances at noon.

4 p.m. Lindsey Horner with Lou Stellute – New York's versatile jazz double bassist will be playing with his band, alongside special guest Lou Stellute of Pittsburgh on the tenor sax.

8 p.m. Lakecia Benjamin – The alto saxophonist will close out the 2019 Erie Blues and Jazz Festival, taking the stage with a skilled crew of her own known as The Soul Squad. Benjamin served as the horn arranger for acts like Anita Baker, Macy Gray, Alicia Keys, the Roots, and Stevie Wonder, and now plays with both Gregory Porter and Craig Robinson and the Nasty Delicious.

Erie Cyclefest is also set to be a part of the popular weekend; guests who wish to explore the 'ever-changing" terrain of Erie can register online for a summer sunrise ride, an off-road "Gravel Grinder" trail, and everything in between. Route fees, distances, and itineraries vary, with rides like the YMCA Tour de Vineyard offering "sweet treats" and peanut butter and jelly sandwiches made from local grapes, and the EmergyCare Tour de West County ending with a picnic and beer and wine sampling at the HUB. Considered Erie Cyclefest's VIP tent, the HUB (located across from Romolo Chocolates on West Eighth Street) features food from local vendors and unique beers from Five & 20 Spirits & Brews. There are even rides with historic and artistic significance, like the Suffragette Ride with Grand Marshall Kathy Dahlkemper, or the card game-oriented Old Maid/Poker Run Route.

If Erie prospers in anything, it's local talent, and there's no shortage to be found at this year's Blues and Jazz Festival. Free and friendly for the whole family, folks looking for a way to support the arts community this season won't want to miss one of our city's most popular traditions. — Aaron Mook