The Arboretum has outdone itself this year 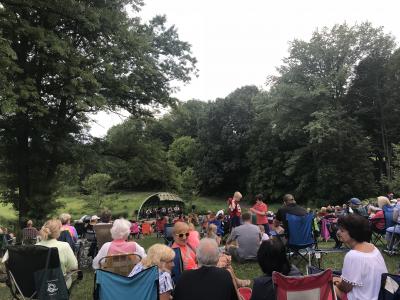 The summer heat has a tight grasp on us, which means it's just about time for the annual Arts in the Arboretum concert and theater series. The performances are free and run weekly into early August, intimately set in the Patricia McCain Outdoor Amphitheater in Frontier Park.

The series is set to kick off this Thursday with the Familiar Spirit Band, a group of classic soul, funk, and R&B performers who prime their audience with hits from legacy acts like Earth Wind & Fire, Stevie Wonder, and Prince, among others. The band is renowned for opening and performing alongside other national soul acts within the tri-state area. Following them on July 25th is Tennessee Backporch, a popular variety band that covers everything from big band and classic '50s and '60s tunes, to country, classic rock, and even modern hits. The Backporch, as they refer to themselves, have been local since 1980, having released an album of original songs titled Children of Song in 2000 and having since expanded from a duo to a five-piece.

On July 28th at 1 p.m., the Erie Philharmonic Quintet will be performing, with Abbey Road, Erie's premier Beatles tribute band (currently in their 24th year of playing) on August 1. Closing out the concert series on August 8th is The Breeze Band, a nine-piece soul group whose expertise extends into the blues and classic rock sectors.

On top of it all, each event will feature a variety of sandwiches, salads, desserts and more from the SorcERIE food truck. The Arboretum has outdone itself this year, booking a diverse crew of musicians to fill the park with music and art (in addition to Gannon's Shakespeare Summer Nights shows). It's a free, family-friendly event series you will not want to be missing this summer. — Aaron Mook