Celebrate the 2nd Annual Very (The) Standby Christmas at PACA

The Standby is joined by Ghost Pool and others to celebrate the holiday and support Chicago-based profit, Hope For The Day 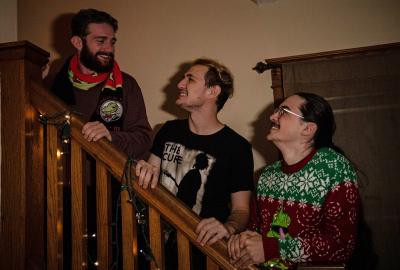 Jayna Deniziak
The Standby are as giddy as kids on Christmas morning for their second annual holiday concert at PACA, where they will be joined by Ghost Pool, The Vics, and The Joke's On Us.

The Standby is headlining another show at PACA. It's not just any show, however; this is the second presentation of A Very (The) Standby Christmas, a tradition frontman Jordan Sigmund hopes will continue.

"A year ago, I wasn't really sure how it would go and what people would think," Sigmund explains. "It took me by surprise though, and this year, it's something that I've been looking forward to for a while now. We've spent a good bit of time thinking of ways to improve it from last year, and we're absolutely hyped! There will be White Claws, food from A Waffle Miracle, and an absolutely stacked lineup."

Speaking of that lineup, The Standby will be joined by a diverse group that Sigmund describes as some of the band's favorite regional peers right now, each bringing their own unique flair to this special holiday show.

"Ghost Pool is infectious, anthemic pop-punk from Buffalo," Sigmund says. "The Vics — who are back for the second time on this bill — bring charming, infinitely danceable indie rock from Pittsburgh, and The Joke's On Us are raw, powerful, and moving alt-rock from Rochester. They're all super special, and some of the best people I've ever met."

The intimate show brings an end to a big year for The Standby, but they're not slowing down anytime soon. The band will embark on a full U.S. tour in 2020 — one that Sigmund says could potentially involve new music. But even more importantly, the band has plans to continue incorporating good causes into their work.

"We just collaborated on a t-shirt with a Chicago-based nonprofit called Hope For The Day, which focuses on providing education for mental health and proactive suicide prevention and outreach," Sigmund says. "We're giving them 40 percent of the sales and spreading their materials wherever we go. Working with them on this made us feel like we can really make a difference while we're playing in this band, and we definitely want to do more things like that in 2020."

Folks who want to support The Standby in their mission can look out for more information at this Thursday's special performance.

"If you're interested in supporting Hope For The Day, definitely check out their website (HFTD.com) for information and resources. Our merch table on the night of the Christmas show will have their resource cards as well as the new collaboration shirts, which you can also pre-order on our merch site now." — Aaron Mook