Celebrate the Seasons with the Fall Edition of Arts & Drafts

Over the past 10 years, the Arts & Drafts Fest has had a firsthand glimpse of Erie's artists growing alongside it. 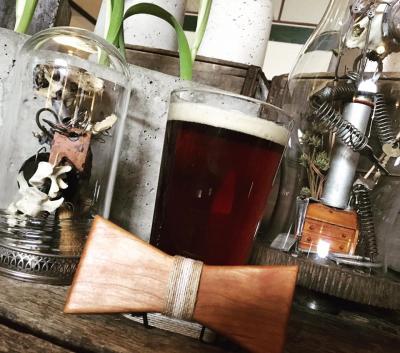 If you've followed our publication for long enough, you know where some of our interests lie: local art, local brews, and local festivals. The bi-annual Arts & Drafts Fest is the culmination of those very three things, and this season's event happens to be a special one.

"This year marks the celebration of 10 years with the fall edition of the festival," says Art Director Amanda Ferguson. "We're happy to highlight this year's featured artist, Corey Thompson," painter and co-owner of Wayward tattoo. Ferguson also pointed out their new fall logo created by Eric Fargiorgio, the artist of the original illustration the festival has used for many years.

A decade is a long time to consistently throw a festival of this size (and a bi-annual one at that); it's a feat that could never happen without the community's renewed interest and investment in the event. And over the past 10 years, the Arts & Drafts Fest has had a firsthand glimpse of Erie's artists growing alongside it.

"Every year we've seen an increase in artists, and this year is no exception," says Ferguson. "As somewhat of an incubator for local artists who are just getting into the Erie art community, we've seen some artists evolve over the years, and that's exciting."

Speaking of those artists, this years Fall Edition of the Arts & Drafts Fest will house a plethora of them, showcasing 70 local artists and 16 local bands, including The Claire Stuczynski Band, Six Year Stretch, Fred Oakman and the Flood, and The New Morning Sunrise among others. Ferguson has some thoughts as to why the festival continues to draw new artists year after year:

"It's such a good networking opportunity. Everyone you want to see is at Arts & Drafts at some point over the weekend. You can catch up with people and meet new connections, and for the artists, the sales revenue is fantastic. Many pieces sell very quickly."

Not to be overlooked, another huge part of Arts & Drafts is the festival's relationship with one of Erie's most popular breweries, The Brewerie, located in the historic Union Station.

"Our organizers and the whole team at the Brewerie are fantastic and do a lot to embrace the event year after year," says Ferguson. She's also looking ahead to year 11, with plans to build a formal website and hopes to start bringing on and incorporating the performing arts as well.

Ferguson says the festival is likely to continue as long as the community and local arts scene continue to demand it. And how could they not, considering its role as Best Art Event in the Erie Reader's annual Best of Erie awards three years running?

What can we say? We love Arts & Drafts. — Aaron Mook