A seasonal case for why you should see Charles C. Mann in Erie Tuesday and Wednesday. 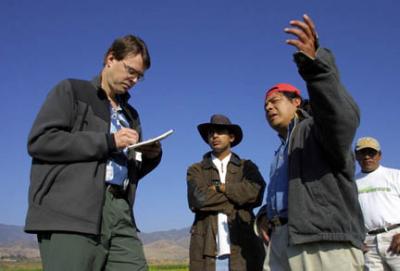 Since Thanksgiving is three short weeks away, allow me to make a seasonal case for the resonance of Charles C. Mann and his work as a journalist...

If you were told the traditional Thanksgiving story as a child, you might recall a kindly Native named "Squanto" who taught the pilgrims to grow corn during their first New England winter. And if you're interested in articles about Pre-Columbian culture, you can probably imagine that this story is pretty misleading. What you might not imagine – until you read a book like Mann's 1491: New Revelations of the Americas Before Columbus – is how much more exciting the real version is.

It turns out that "Squanto" is our dumbed-down name for Tisquantum, a member of the Wampanoag Confederacy that lived along the coast of New England at the start of the 17th century. The real Tisquantum wasn't the benevolent farmer we've made him out to be, but he did work as a translator and he helped establish the original Plymouth colony.

Seven years prior to our Thanksgiving tale, Tisquantum was kidnapped by British sailors and brought to Europe. The sailors sold him into slavery in Spain, but he managed to escape to England. According to Mann, he "served as a kind of living conversation piece at a rich man's house" during his time there. To avoid this humiliating fate, he escaped again and made his way back to America. By the time he returned, he was fluent in English.

The story of Tisquantum is emblematic of Mann's approach to history. Through the story of a single individual, he not only calls into question the stereotypes we've inherited from the Wild West mythos, but also the sentimentality offered by well-meaning revisionists. According to Mann, the Pre-Columbian world wasn't populated by proto-hippies communing with the wilderness. It contained complex social structures, intricate hierarchies, ambitious engineering projects, and a far greater number of people than anyone imagined a generation ago.

Mann's stories stick with you. Whether he's describing Incan architecture (as he might on the 4th) or documenting the corporate mischief that lead to the sale of aspirin (as he will on the 5th), he keeps his language clear, relatable, and engaging. The next time you pop a pill for a headache, you might recall the legal backstabbing that brought the pillbox to your medicine cabinet. And as you slurp your creamed corn on Turkey Day, remember the guy who escaped bondage twice to make the meal possible.