The Kayak Anglers of Western Pennsylvania invite you to their inaugural Presque Isle Tournament. 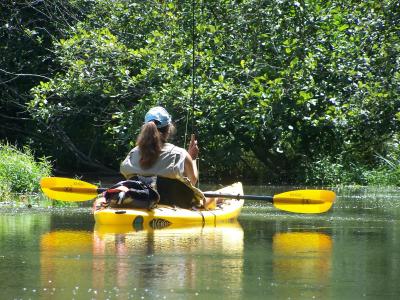 Q: Where my bass fishes at?

A: Keeping it fresh on the west side … of the Prime Meridian, that is. The black basses' (genus Microptera) natural range extends east of the Rockies, from the Hudson Bay basin in Canada to northeastern Mexico, although they have been known to turn up most anywhere these days (within the .01 percent of the Earth's surface water that is non-saline. Seems exclusionary, but don't worry – with a conservation status of "least concern," they have no reason to be salty about it).

Anywhere, of course, includes the Great Lakes, which contain over 21 percent of Earth's freshwater that is not frozen in glaciers/snowpack/icecaps (for now) or trapped in the ground and/or soil. Although the feisty smallmouth bass can be found patrolling the open waters of our very own Lake Erie, a greater variety is available in the relatively calmer environs of Presque Isle Bay – including the largemouth and spotted species. Seems like the ideal locale for a casting call, does it not?

The Kayak Anglers of Western Pennsylvania invite you to their inaugural Presque Isle Tournament, the first of
six events in the race to Angler of the Year.

The Kayak Anglers of Western Pennsylvania invite you to their inaugural Presque Isle Tournament, the first of six events in the race to Angler of the Year (only Kayak Angler members are eligible for the distinction). Unlike most bass tournaments, all fishing must be done from a kayak, one-person canoe, or SUP (what's SUP? Stand-up paddleboard.) As such, the format is catch-photograph-release, with scoring based on total length instead of total weight (specialized bass boats employ built-in bass lounges to keep the catch alive until weigh-ins – chances are your individual, self-propelled watercraft is not as posh). Measurements are taken from a closed mouth (if they don't shut it, shut it for them – you're the boss, tartar sauce) to the tail, and visually documented via mobile device or digital camcorder.

According to FishErie.com, popular hangouts for bass are Misery Bay, Marina Lake, Horseshoe Pond, and the area from Perry's Monument to the channel. Only artificial lures are permitted in the Presque Isle Tournament – sorry, you're not going to worm your way out of this one. Luckily, bass are instinctively wired to investigate any stirring (the lateral line running under their skin detects minute pressure changes in the water and makes them exceptionally gullible). Although they consistently bite on the play fake, you won't score one without a fight – which can be quite a thrill if you know where to find it.