Cities Have Become the New Laboratories of Success

And if it wants to succeed, Erie must experiment. 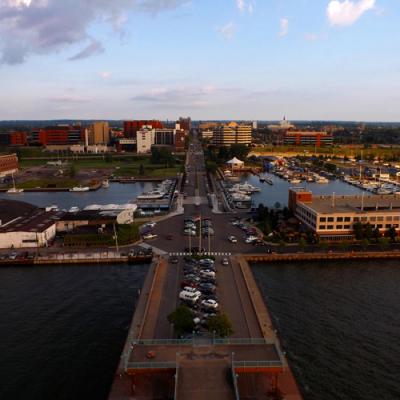 In an under-appreciated work in his illuminating canon, Mark Twain (with co-author Charles Dudley Warner), described America's Gilded Age as "a time when one's spirit is subdued and sad, one knows not why; when the past seems a storm-swept desolation, life a vanity and a burden, and the future but a way to death. It is a time when one is filled with vague longings; when one dreams of flight to peaceful islands in the remote solitudes of the sea, or folds his hands and says, 'What is the use of struggling, and toiling and worrying any more? Let us give it all up.'"

Fast-forward a century to James Fallows' must-read recent feature in The Atlantic, "How America Is Putting Itself Back Together." Fallows begins by acknowledging that Twain's quote has become our country's humdrum hymn. As a whole, the country – "most Americans believe," writes Fallows, "is going to hell."

So we give up. Begin dreaming of elsewhere, pining for that which is other, while wondering whether someone else – anyone else – will pull us off our path to perdition.

But Fallows says most Americans who think that are wrong. And he's right. Because after a three-year, 54,000-mile trek across the country, Fallows offers optimistic insight and important examples of how America is hard at work rebounding. The country, despite our shared feeling about its hopelessness, is quietly being rebuilt. Not at the federal level. Rather, it's happening locally.

Key amongst Fallows' chronicles is Pittsburgh, somewhere that hasn't been all that quiet. "Pittsburgh's late 20th-century transformation from dirty, dying steel center to chic tech hub is probably the best-known American turnaround story," he writes.

Meds and Eds have helped to pave the way to Pittsburgh's about-face, one-half of which we're seeing trickle 200 miles upstream into Erie. But the story you don't often hear is the struggle Pittsburgh has been facing with the imbalance of its people-to-place ratio – something Erie, a city that's dwindled to 100,000 from our 1960 peak of 138,000 in a city built for 150,000, knows all too well. In an effort to level out its two-to-one place-to-people imbalance, Pittsburgh quietly turned to its art scene.

First, it is blessed with "rich, locally-rooted philanthropies [The Mellon, Heinz, Carnegie, Frick, and other charities that other cities envy but few can imitate] set up by the titans of the robber-baron era [who remain] committed to the city's development," notes Fallows. That, we can't replicate.

But second, Pittsburgh harnessed the power of initiatives like the City of Asylum project, which is reviving rundown areas by inviting persecuted writers, poets, journalists, and more. In 2004, Henry Reese and his wife Diane Samuels opened the only independently funded City of Asylum location in the world, turning a strip of row houses into a haven for artists. Which led to an influx of more creative types and a bottom-up transformation of the city's housing stock.

Spread far and wide, the varied cities and regions Fallows reports on all have that in common – they're places where people want to be because the people are making them places to be. And whether other cities copy, imitate, or model them, they serve as beacons of hope that we can survive The Second Gilded Age and can thrive in a post-Gilded Age era, since we all know that cities like Erie can't count on a bailout like Detroit's.

As Erie continues to address its 25-year plan with Emerge 2040 and begins its vital conversation of Erie Refocused, the multiyear development plan for the City of Erie created by czb planning firm, we must plan to work overtime in our laboratory.

America survived the first Gilded Age – and even then, it wasn't thanks to federal help. Rather, we witnessed the importance of the "laboratories of democracy," as U.S. Supreme Court Justice Louis Brandeis called states that tried "novel social and economic experiments without risk to the rest of the country."

This time, such experimentation is taking place on the local level with cities and regions putting America back together. As Erie continues to address its 25-year plan with Emerge 2040 and begins its vital conversation of Erie Refocused, the multiyear development plan for the City of Erie created by czb planning firm, we must plan to work overtime in our laboratory.

Of all of the possible outcomes, we know for sure that no one is going to show up with the answer key for us. If we believe that and choose inaction over action, we might as well sit back with our hands folded, dreaming of remote islands and progressive cities where dreamers are dreaming and doers are doing because they continue to toil and refuse to give up.

Ben Speggen refuses to sit with his hands folded. He also recommends you read Fallows' feature for its sidebar that outlines "Eleven Signs A City Will Succeed." You can contact him at bSpeggen@ErieReader.com and follow him on Twitter @BenSpeggen.