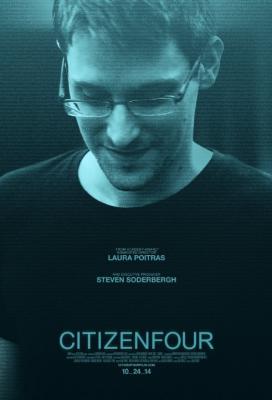 Early on in Laura Poitras' 2014 documentary Citizenfour, whistleblower Edward Snowden confesses that he's "a little concerned that the more we focus on [my personality], the more they're going to use that as a distraction." It's clear that he means this in good faith, but I couldn't help finding the comment ironic – because he proves to be such an effective public face for the issues raised by the film.

Snowden, who in 2013 exposed an unprecedented array of secretive global surveillance programs (mostly overseen by the U.S. National Security Agency), remains calm, sober, and remarkably articulate throughout Citizenfour. Clearly this is no embattled 20-year-old in a Guy Fawkes mask – he's capable of explaining complex encryption systems in (more or less) understandable terms and his reasons for exposing government secrets are thoughtful, focused, and rarely inflammatory. Hell – he's even good looking!

You'll have an opportunity to evaluate Snowden's charismatic case for civil liberties when Citizenfour is screened at the Erie Art Museum on Wednesday, July 1 when FILM at the Erie Art Museum presents the acclaimed work. And don't get me wrong – there's little idol-worship on display in the documentary. Poitras is less interested in audience manipulation than in making the specific process that lead to the leaks as transparent as possible. There's little editorializing beyond her documentation of the day-to-day discussions that lead to the revelations. Expect no weepy confessions to the camera or ad hominem attacks on adversaries. The film is technical, detailed and informative – expect some of the legal terminology to go over your head.

It's important to note that Snowden didn't simply dump classified information into the laps of an unsuspecting public. He worked closely with acclaimed journalists like The Guardian's Glenn Greenwald and Ewen MacAskill. In fact, Poitras, Greenwald, and MacAskill won a Pulitzer for this work in 2014. Clearly all three have strong, debatable opinions about government transparency, but the film makes it clear that they take the consequences of the leaks seriously.

Toward the end of the documentary, we see President Obama speaking critically of Snowden. After dismissing the idea that his impulses may be patriotic, the President claims that his preference would have been for "a thoughtful, fact-based debate that would then lead us to a better place." It seems to me that this is exactly what a documentary like Citizenfour is enabling. We can't have fact-based debates in a society that keeps the facts secret. You might not agree with everything being defended in Citizenfour, but you'll leave the theater with important questions about privacy in the 21st century.