Come Get 'Decked' Down at Tall Ships Erie 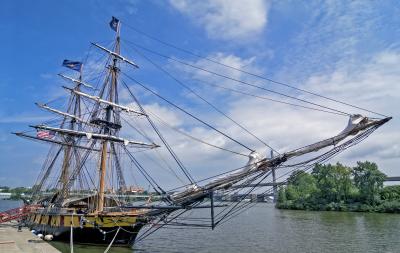 Were you to Google "tall ships definition" you would get a deceptively simple result: "A sailing ship with high masts."

Is that all the U.S. Brig Niagara is to Erie, though? Just a ship that sails and has long masts?

Think again, Google. Because in Erie, the phrase "tall ships" is loaded with both a rich maritime history and a source of fierce civic pride, which is why it is so exciting (and so logical) that Erie is once again hosting its Tall Ships Erie event, a full weekend jam-packed with everything that is seaworthy and see-worthy in the Bayfront area, perfect for both out-of-towners and locals who might take the significance of Erie's location on a major national waterway for granted.

"I've spoken with so many people over the years who have never even been down to the ship before, or haven't been down since [they toured] ages ago in grade school," said Sydnee Groenendaal, co-chair of the Tall Ships Erie 2019 Committee and operations manager of the Flagship Niagara League (FNL). "The maritime history of our city can feel completely foreign."

Speaking of traveling the world, the globe-trotting ships on parade in the Bayfront include 14 tall ship vessels: the very familiar U.S. Brig Niagara and the Lettie G. Howard; the breathtaking Denis Sullivan (the flagship of Wisconsin); the St. Lawrence II out of Kingston, Ontario; the incomparable Spanish replica Nao Santa Maria; and the entirely homemade (yes, you read that correctly) Fair Jeanne, which originally operated as a private family sailing yacht.

As in previous years, Tall Ships Erie offers one-day passes for general admission and access to all the festivities, including live music, vendors, and educational seminars (food and drink from trucks and beer vendors must be purchased separately), as well as weekend passes, neither of which include deck tours. Deck tours (for nine of the participating ships) can be added for only $5 per pass. The weekend VIP passes, however, include refreshments, VIP parking, VIP line access and deck tours, too. The festivities will shove off with the Parade of Sail on Presque Isle at 4 p.m. on Thursday, with fireworks that evening. The main festival will begin Friday and run to Sunday; the grounds open from 10 a.m. and close at 6 p.m., for deck tours of the ships, exhibits and more. Music runs until 4 p.m. with a shuttle service running from 8:30 a.m. until 7 p.m.

"We have multiple types of educational offerings all over the festival," Groenendaal continued, "from the exhibits in the Maritime Marketplace, to a lecture series in the Bayfront Convention Center, to history and storytelling at the Erie Maritime Museum."

She added, "We also have fun hands-on educational activities at the Holland Street Pier, as well as a Kids Zone with some really cool activities."

But perhaps most importantly, you'll also find the World's Largest Rubber Duck and her baby over at the Holland Street Pier. Mama Duck caused a sensation during her previous appearance on Erie's Bayfront and clocks in at over six stories high and 11 tons in weight.

The future for Tall Ships Erie is clearly looking bright, but it is also a time to reflect on how lucky we are to have this natural resource in our backyard.

Groenendaal remarked, "Festivals like this give us a chance to imagine what life was like for people living here when the waterfront played a more central role, when water was the primary way that people, ideas, and trade traveled the world." — Cara Suppa