Coming Back for Seconds

The powerful appeal of pepperoni balls and our public library 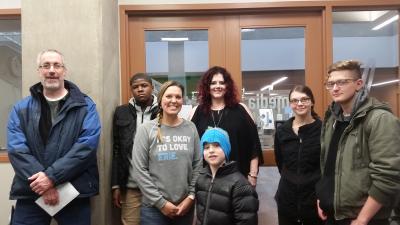 If someone asked me to sum up two of Erie's strongest selling points, I'd reply, "Pepperoni balls and the public library."

I've been chewing on the connection between these two seemingly disparate things ever since I attended a digital media class at the Blasco Memorial Library and then interviewed a California guy with a hankering for pepperoni balls.

Erie, I decided, is a place that thrives on ingenuity, past and present. After all, weren't pepperoni balls invented when an intrepid pizza-maker decided to find a tasty use for leftover dough? And aren't we lucky that Erie's forward-looking leaders invested dough into the Erie County Public Library, which now features both the Idea Lab, with 3D printers, and the Digital Media Lab?

My 13-year-old grandson Jerry and I had already tried out the equipment in the Digital Media Lab a few weeks before the two-hour "Learn to Record" class I took on April 5. At our impromptu session, Jerry and I riffed about cover bands versus original music (his dad plays guitar with the local hard rockers Detroit Red). We talked about Internet precautions for teens. We discussed the science, technology, engineering and math classes offered at his school, Harbor Creek Junior High.

Jerry explained what he learns by listening to podcasts, including some from NPR, during rides in the family van. I asked him what people my age should know about the digital media landscape. By the time we wrapped up, we had created a brilliant podcast. Unfortunately, we didn't bring a jump drive to save our work.

Next time, I wanted to make sure I knew what I was doing.

That's why I enrolled in the "Learn to Record" class taught by Sammy Stone, morning host for WTWF-FM, The Wolf. "This is the Cadillac," said Stone, raving about the lab's sophisticated equipment as she demonstrated how to record individual and multi-track files.

We were strangers when we started. By the time we finished, someone joked, we resembled "The Breakfast Club" -- a cast of unlikely characters who had bonded.

Our group included Chris Buckley, a locomotive designer for GE, and his 9-year-old son, Jordan, who volunteered to be the first to test his voice modulation. Soon, we were all trotting up to the microphone to speak a few words, share our stories and connect with each other.

We heard from Andre Crockett, an eighth-grader at the Maritime Charter School, who likes to make gaming videos and play basketball, and Dave Doupe, 19, a student at Edinboro's Porreco College who is interested in music therapy.

Lauren Laska, a Behrend graduate, said she likes to rap, while Lori Burke, a freelancer songwriter, talked about her original work for Sesame Street.

Lori's sweatshirt, "IT'S OKAY TO LOVE ERIE," made by Erie Apparel, caught my eye. I hoped that the same message had been conveyed to Jim Fox after he posted a question on Facebook about whether he should move back to Erie from San Diego. "Am I crazy to think about moving back to Erie? I feel myself missing my roots, my childhood friends, my old neighborhood. Am I nuts?" he asked.

Jim posted in the group, "You might be from Erie, Pa. if …" on April 1, so some Facebook users figured it was an April Fool's joke. Why would anyone leave California for Erie? Yet I've met about a dozen people in the last year who have moved to Erie in midlife. Some are former Erie residents who have come back to retire or to care for aging parents. Others don't want to be empty-nesters; they want to live close to their adult children who work in Erie. My favorite new friend is a woman in her 70s who moved here from Tampa a few years ago because she and her husband love Presque Isle.

I'm not alone in spotting a mini-trend. "I have had the privilege of meeting a number of people who have moved away to California and Florida and are moving back to be near their children and grandchildren. I have met many of these folks as they have visited open houses recently," says Gerri Newara, president-elect for the 2019 Greater Erie Board of Realtors. "What they have said is that they are tired of missing their grandchildren's school events and sports activities."

I wanted to know if my anecdotal evidence meshed with what Jim was learning from his Facebook post.

Instead, after I learned from his profile that Jim is a political science teacher at Cal State in Long Beach, I called him for an interview.

"It might be that I'm being nostalgic from what I remember as a kid," says Jim, 53, who originally lived in Summit Township but later moved to East Seventh Street. His teenage life became chaotic after one of his brothers, David Gustafson, drowned in Walnut Creek.

"You didn't do therapy back then," he says. "Once my brother died … my mother sort of checked out and we sort of fended for ourselves."

Still, he remembers the adults who served as positive influences, including former teachers and Judge Fred P. Anthony, who put him on probation after he got in trouble. Jim, who became a lawyer after serving in the Navy, said that it was fun to go back and talk to the judge. "That man dealt with thousands (of youth) and he remembered my mother, a very tenacious woman."

There are other attributes of Erie that he holds dear. In California, "If you have a house that is 50 years old, it's time to tear it down," he says. "You don't have neighborhoods anymore. You just have people living in houses that are close together." But in Erie, he can visit his old Seventh Street neighborhood "and everything is just like when we left."

Growing up, Jim attended a number of schools — Robinson School in Summit Township, St. Mary Catholic School on East 10th Street and Erie Day School. "I remember when my mother used to drive us to Erie Day School, a woman on Eighth Street, going east, would sit in the window and wave at us and we'd wave back. That's what I'd do in retirement. I just want to be that person that sits in the window and waves at the kids going to school."

He admits that it would be hard to leave San Diego. "The average temperature is 72 degrees year-round. I own one pair of pants. Other than that, I'm always in shorts."

Naturally, there were Facebook commenters who agreed that he would be "nuts" to trade his California lifestyle for Erie's. About a third of the responses were some variation on the "Oh my God, the snow" theme. But he can deal with the snow, he says, and besides, it's not always as brutal as it has been this year or in 1977, another notoriously bad winter. "If those are the only two references you have to snow, I get it. Stay away."

But about two-thirds of responders advised him to follow his heart — and his stomach. He loved the references to favorite Erie foods — ring bologna, chipped-chop ham, Troyer Farms potato chips, pepperoni balls. "I forgot about pepperoni balls!" he said. When he couldn't find a vendor to send him an order of pepperoni balls, someone on Facebook came through. "Tell me what you want, I'll get a shipment to you," the Facebook friend said.

Jim marvels at that response. "This is a stranger I don't know who understands," he says. "We don't have people here that would really reach out and do those kinds of things and go the extra mile."

Liz Allen goes the extra mile to deliver pepperoni balls to her out-of-town son, siblings and college roommate when she visits them. You can reach her at lizerie@aol.com.

A Trail of Shared Heritage