Is buying local becoming the way to get produce? Abby Badach checks out the Community-Supported Agriculture scene in Erie. 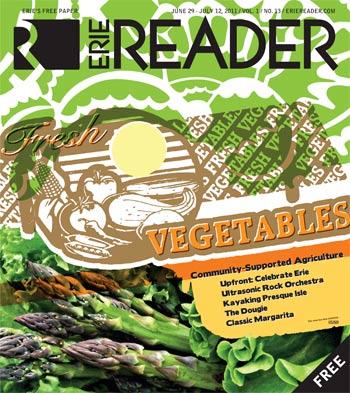 With a farm dog curled up on a hand-built porch, the distinct crackle of pickup truck wheels on a dirt driveway, and the scent of fresh-cut grass in the air, Gordon Post's fourth-generation farm in North East is a rustic little slice of countryside heaven.

But he couldn't keep it going as strongly without the help of his CSA members.

"I have this thing about watching stuff grow," he said. "And, you know, we really can't sell all the variety of things I like to grow to a grocery store. But there are lots of people that like variety and would like to buy local. And so I said, 'This is the opportunity to do it.'"

CSA stands for "community-supported agriculture," a direct partnership between a grower and a consumer. Participating farmers plant a variety of vegetables slated to produce throughout the summer and fall months, and interested consumers pay an up-front subscription fee that entitles them to a basket of freshly picked, locally grown, seasonal produce each week.

Prices vary per farm and by the quantity of vegetables – for a full share (based on one bushel) over the course of a 20- to 24-week growing season, the going rate ranges between $300 and $600. Some farmers require their CSA members to pop in a few times per summer to help out with planting, weeding, or picking, while others make the work component optional.

Wendy Elliott runs a five-acre CSA in North East between her two-acre Earth and Vine Farm and three acres of her parents' adjacent property. Elliott, who's been operating her CSA for three years, said she serves mostly families with young children, and they all seem to enjoy getting out in the fields and getting their hands dirty.

"It's really kid-friendly out there," she said. "I don't freak out if they step on the potato plants."
Elliott – who also sells her produce to local restaurants, like Avanti's – said she grows about 20 families' worth of food and has noticed her produce has a somewhat magical quality: kids who come to meet her or help on her farm will actually eat their vegetables. Maybe they won't eat frozen beans, but Mrs. Elliott's green beans? They're all over them at dinner.

"Kids are more apt to try things if they've actually touched it or seen it," she noted.

Post farms 30 acres for his CSA and serves 206 members – a skyrocketing increase from last summer's 57 subscribers, which he attributes solely to word-of-mouth. He has the space, he said, and hopes to one day to get 1,000 people on board.

His farm used to focus on hundreds of acres of potatoes, oats, and apples, but learning about the benefits of CSA inspired him to switch his focus.

"We're trying to pare down so that everything we do is going to be geared direct to the consumer," he said.

Plus, he merrily disclosed, he simply loves seeing a diverse field of 200 kinds of exotic produce blossom over the course of a growing season – it's simply a lot more fun to grow.

How does it help the farmer?

"For people who want to have that direct connection between where their food is coming from, CSA is really the best way to do that," said Leah Smith, member services manager for the Pennsylvania Association for Sustainable Agriculture. PASA is a statewide network of growers and consumers who work together to advocate for family-owned, environmentally friendly farms and their harvests.

"Because, by making that payment up front, you are ensuring that a small farmer in your community has the resources it needs for the season."

Dawna Teed of Teed Farm in Albion, Pa., started farming two acres as a CSA farm three years ago. She has 17 members, the same number she had last year, although her waiting list is growing.

For Teed, a CSA provides a sense of security to farmers who are struggling with hit-or-miss turnouts at farmers markets.

"You grow this stuff, you harvest it, you cart it down to the market, and it might or might not sell," she said. "So I figured, if we have members, you know how many people you're trying to grow for."

But that doesn't mean it's always easy.

This year, the Erie region had a cold, rainy spring, which pushed back the growing season by a few weeks.

"It's a pain in the neck," Elliott said, "because I've had to get everything in the ground as fast as I could as soon as it dried up."

Teed explained that wet weather makes the soil stay cooler longer, and some plants need warmer soil of a certain temperature before they can sprout.

"It hasn't been the best growing season, but you make do with what you have," she said.
Elliott maintained a positive attitude, too. Before people get too pessimistic about the weather's effect, she said, they should realize it doesn't affect the harvest all that much – just the timeline during which it grows. Even though she pushed her first CSA pickup date back by nearly a month, she reminded her members that they'll still be getting the same amount of food – just in a shorter period of time.

"You'll just get more of it each week because you have fewer weeks to get it all in," she said.

But that's part of joining a CSA – the customer pledges to be in it with the farmer, for better or for worse, whatever the weather.

"Some people don't know what to do with rhubarb"

The main obstacle of the CSA system? The customer has to have the time and willingness to learn how to cook, freeze, or can unusual crops like kohlrabi, fingerlings, Swiss chard, or mustard greens. Adventurous cooks salivate at the thought of such diverse offerings – Post said his farm grows at least 200 different varieties of vegetables; Elliott said she offers 250 kinds – but if you're used to just nuking steam-in-the-bag veggies for dinner, then finding a way to use your CSA might prove to be a bigger challenge than you initially thought.

Post noted that one bushel is likely too much for a single person to eat over the course of a week, so he would encourage investing into a half or quarter share if you're not sure you can handle the sheer volume of the harvest.

"We're not rabbits," he explained with a chuckle.

But fear not, produce-hungry readers.

"The nice thing about CSA is that they kind of hold your hand through it all," Smith said. "Farmers will usually put out a weekly newsletter with recipes, some of them invite folks to the farm for pick-your-own or potlucks. It's really more than just picking up your vegetables each week – there really is a community, a sense of community, that you're a part of it."

Elliott understands that finding ways to utilize the bushel can be a challenge, so she provides an e-newsletter to her members with weekly recipes for the current seasonal harvest. In an age where nearly any vegetable can be procured from the closest produce aisle at any time of the year, she said people aren't aware that different plants naturally yield crops months apart from one another. She aims to get her CSA members in touch with the rhythm of the natural growing season in this region.

"Cookbooks these days, they'll have you making a dish with zucchini and peas in it," she said. "And I'm like, 'They do not grow at the same time!'"

Teed opts to stuff printed recipes into her members' baskets featuring imaginative ways to prepare that week's batch of produce, from preparing an unbeatably fresh chopped salad to sneaking it into baked goods.

"Some people don't know what to do with rhubarb," she said with a laugh.

What's in it for the consumer?

The freshness factor from CSA crops places them above and beyond produce found at a grocery store, Teed said. She noted that the average bag of spinach bought from a grocery store has likely been picked a week or two before in order to give it time to be processed by a packaging plant, travel thousands of miles from California or Florida and make its way from the truck to the shelves.

And then think of all the people who picked up that bag and handled it before you placed it in your cart.

But CSA produce picked up in a bushel is likely to have been picked that morning, or just a day or two before. Not only will that make it taste fresher and sweeter, Teed noted, it stays better longer – eliminating the "ick factor" of having to constantly clean slimy produce out of the fridge because it goes bad so soon.

"I've picked spinach out of my garden, and it's lasted a month in my fridge," Teed said. "It's that fresh."

She added that consumers can benefit from the direct connection with the farmer, having a personal relationship with the person who works hard to make sure you eat well. That's not always possible when shopping in a grocery store, she said, and CSAs offer a more personal alternative.

"If you have a problem, or something's not ripe, the person you got it from is right there that you can ask about it," she said.

Neither Teed, Elliott, nor Post is certified organic, but they all said they incorporate sustainable practices into their farming – something a massive, industrial farm doesn't have the luxury to do.

Post said he uses agricultural plastic at the base of his crops instead of spraying herbicide every which way.

Elliott has opted to spend an afternoon squishing 500 individual Colorado Potato Beetles by hand she found crawling on her rows of potatoes, instead of spraying them with pesticide.

"It's like squishing a pea that's really, really soft," she said. "And they have red guts. It's not all that pleasant."

Smith said CSA programs benefit all major components in the food cycle – the earth, the farmers, the individuals who eat the produce and, perhaps most importantly: the community.

"It gives the community the benefit of the healthy food, the preservation of agricultural land within their community," she said. "You really get to see where your food is coming from and be connected to it."