Considering the City (and County): United we stand 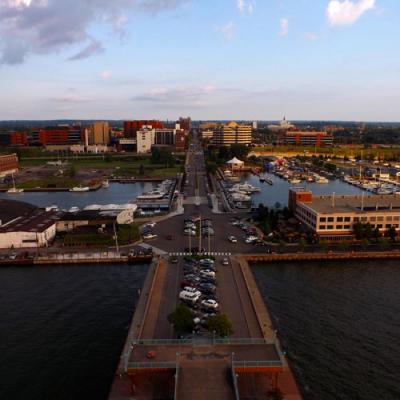 A little more than a century ago, city leaders commissioned John Nolen (1869-1937) to create a plan for the improvement and extension of "Greater Erie." In his 1913 report, Nolen encouraged improved public transportation, increased access to the waterfront, and retention of open spaces. Much of what Nolen proposed is echoed in Emerge 2040 and the Erie Refocused planning documents.

Produced in the 1930s, "redlining" maps discouraged bank loans in specific U.S. urban neighborhoods, especially those with minority populations. Much of Erie's east side was redlined and the deliberate disinvestment was effective. In fact, Charles Buki's recent map of real estate values mirrors the 80-year-old redlining map of Erie.

But there is still hope. Dr. Onjanette Jackson recently transformed an abandoned east side property into a beautiful house. Rather than immediately addressing blight with demolition, we should empower the people willing to put in the work to make a home.

Today, many good city jobs are filled by people living outside the city. Continued development in the county has reduced the population and wealth of city residents, while it has increased both measures in the county.

The loss of family-sustaining blue-collar jobs has left many unemployed. We must proactively support workforce training and catalyze regional economic development to create jobs. In addition to eds and meds, high tech businesses, and cultural and recreational tourism, we must embrace manufacturing by promoting locally-held product-design patents.

Superintendent Jay Badams and the school board of Erie's Public Schools recently announced a proposal to save money by closing the city's high schools. Badams' dramatic solution attracted attention from the Huffington Post's Peter Greene, who commented that Pennsylvania has "one of the most dysfunctional funding systems in the country."

According to Badams, Pennsylvania's 25-year-old Hold Harmless Agreement institutionalized state-wide inequity by maintaining the proportion of funds distributed to school districts, irrespective of reductions or increases in students. We must insist on a complete fair funding system to ensure that Erie's students are treated equitably.

Across the U.S., most public schools are supported by a combination of state funding and local real estate school taxes. One would suppose that the city's higher millage rate would generate a nice pile of money. Instead, because real estate values in the city keep dropping, Erie's tax revenues are insufficient.

We must increase demand for city properties by slowing suburban and rural construction with some kind of "no-growth" boundary to protect open lands and spur reinvestment elsewhere. It is crucial that we involve design professionals in all development and transportation planning to prevent short-sighted decision-making, as exemplified by the closing of Division Street and the proposed demolition of the McBride Viaduct (both of which remove safe passage over/under the railroad tracks and isolate low-income neighborhoods by removing their most direct route to schools).

Much city property is tax exempt. But according to Amanda Brown Sissem, executive director of Erie Arts & Culture, Erie's non-profits "benefit the community in ways that government and for-profits don't." Sissem reports that non-profits create jobs and foster regional economic prosperity as audiences utilize nearby businesses.

Taxing non-profits is not the answer. But regionalized taxation would allow county residents to share the responsibility of maintaining our vital non-profit organizations.

Another alternative, one that would require state approval, is an Earned Income Tax (EIT) to be applied to a percentage of non-resident income.

For the past few weeks, we've witnessed a showdown between the mayor and City Council over the use of a small portion of the CDBG block grant funding. The mayor wants to address blight by hiring another code enforcement officer. Council wants to support community centers.

Decades ago, the distribution of CDGB funding was made collectively by a committee; we must return to that inclusive decision-making process.

Over the past half-century, a majority of appointments to the EMTA board have been made by City Hall, with the balance by county leadership. As the 50-year-old charter ends, a power struggle has erupted between city and county leadership. The argument seems to be over who makes board appointments. Given the city's financial troubles, and the logic of regionalizing services, it makes sense to establish a new, 10 to 20-year charter handing over the responsibility of the EMTA to the county.

Since the county is anxious to take this on, perhaps they would pay the city an annual fee for the privilege; but EMTA jobs must remain secure. Appointments to the EMTA board should be by application of qualified individuals, and should include a bus-riding expert and advocate such as All Aboard Erie's Julie Minich.

A transparent model for applications and appointments for the boards of the county, cities, townships, boroughs, and authorities would encourage more civic engagement and better decisions.

Add to these issues the painful fact of increasing gun violence. We must move beyond reacting to each crisis and proactively address the systemic structures creating the problems.

Erie County encompasses 13 school districts, two cities, 13 boroughs, and 22 townships. Dozens of mayors, supervisors, and other officials manage communities with populations as large as 100,000 (Erie) and as small as 200 (Elgin). When many of these places were founded, people traveled by horse. Each municipality has its own zoning plan, resulting in regional sprawl.

It's time to work together.

Seeking to create safer communities in 1854, the City of Philadelphia expanded from two to 130 square miles when it annexed the entire County of Philadelphia. Philly's pro-annexation motto, "In Union There is Strength," ought to inspire Erie.

Leaders from Erie should join with those from other distressed Pennsylvania cities (Bethlehem, Allentown, Scranton, etc.) to collectively propose some kind of long-term, state-wide incentive to advance annexation of existing townships. Let's study consolidating our 20-square-mile city with our 800-square-mile county.

However, as Lawrence Park leadership just demonstrated (in its refusal to participate in a free study regarding a possible consolidation with Wesleyville) even a discussion of change will meet strong resistance.

Still, we must persevere, keeping in mind the public good resulting from a coordinated vision for zoning and land use, fire safety and law enforcement, preK-14 education, community and recreation centers, and transit and economic development.

Readers are invited to attend Erie CPR's third community conversation on Tuesday, June 14 at 6 p.m. at the Erie Art Museum. For more information, email connectplusrespect@gmail.com, or check out the Erie CPR: Connect + Respect page on Facebook. Leave a message for the ErieCPR board president, Dr. Anthony Harris, at the Shiloh Baptist Church office, 453.4909.