Arts revive and hone our humanity, contribute to social interactions, foster innovation, and attract and retain human capital to the region, thus enriching our economy. 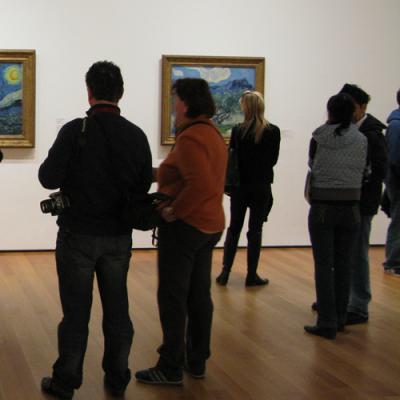 Attending arts and cultural events in Erie for the last 20 years, I have been transported by music, transfixed by dance, lost in film, overwhelmed by theater, shocked by poetry, enchanted by crafts, challenged by visual arts – and engaged in conversation with people of all ages, races, economic status, levels of education, political views, spiritual practices, physical abilities, and birthplaces. Arts revive and hone our humanity, contribute to social interactions, foster innovation, and attract and retain human capital to the region, thus enriching our economy. Arts organizations also measurably put dollars into the local economy. They can't out-source their workers and tend to buy supplies nearby (thus supporting other local jobs). Additionally, arts organizations attract visitors downtown to spend their dollars in Erie.

Published by the Department of Commerce's Bureau of Economic Analysis and the National Endowment for the Arts, the Arts and Cultural Production Satellite Account (ACPSA) details the contributions of our country's arts and culture sector to the gross domestic product (GDP). The GDP is the estimated value of "all goods and services" produced in the U.S. According to the 2015 ACPSA report, U.S. arts and culture economies create jobs not only within the arts and cultural industry; but also in other sectors at a rate of 1.6 to 2. For example: Two theater jobs support the creation of 1.6 jobs in other industries.

In 2012, the most recent year for which data is available, U.S. GDP was $16,163.2 billion. The ACPSA report reveals that the arts and culture sector's contribution to the GDP was $698 billion. This exceeded the construction industry's portion ($586.7 billion); as well as that of the agriculture, fishing, forestry, and hunting industry ($195.3 billion). The ACPSA report lists specific arts and cultural industries in descending order of contribution to the GDP: 1) broadcasting, 2) motion picture, 3) publishing, 4) retail trade, 5) performing arts and independent artists, and 6) advertising.

For now, let's assume that Erie broadcasting, as it currently exists, has a limited audience base. Next, we can probably agree that a motion picture industry does not really exist in Erie (despite the potential to feature a variety of settings – city to rural and forest to ocean – as utilized in That Thing You Do (1996) and The Road (2009). Nevertheless, individual filmmakers could, with support, make this industry a larger economic player.

Nationwide, advertising contributed over $29 million to the GDP in 2012. While the impact here in Erie has not been defined, we can clearly boast sophisticated firms specializing in advertising animation, web, and graphic design, including Creative Core, Epic Web Studios, MoreFrames, PAPA Advertising, and Werkbot Studios. These firms serve clients in Erie and nationwide, and some are looking to expand globally.

David Hunter, managing partner of the eight-year-old Epic Web Studios, reported that in addition to regional work, his firm attracts clients from big cities like Chicago and Boston. Due to Erie's lower cost of living, Hunter explained that Epic is able to "provide a higher tier of service at a lower cost than major agencies in big metropolitan areas." Hunter wants to help make Erie "a known spot for technology and digital marketing."

Mark Tanenbaum, artistic director at Performing Artists Collective Alliance, says PACA "pipelines all [earned] money and spends it back out" in the community. His team has invested $50,000 in remodeling the hundred-plus-year-old building at 1505 State Street. These funds were spent locally, hiring electricians and plumbers, and buying supplies and materials at Kraus Department Store, Frontier Lumber, or Gypsum Services. Local musicians are hired per event. Currently, PACA's gallery is filled with 75 artworks by independent artists (NPAA members) which will be featured during the March 11 Gallery Night and auctioned off on March 12 from 1-3 p.m. as a fundraiser for each artist, the NPAA scholarship, and PACA.

Melinda Meyer, program director at Erie Arts & Culture, explained that her organization is participating in a national study on how the arts impact economies. Along with 300 other communities across the country, Erie Arts & Culture is working with Americans for the Arts, as they produce their fifth report on the arts and economic prosperity. Their last report, with figures from 2010, indicates that Erie County arts and culture organizations and audiences together spent over $18 million, resulting in over $700,000 received "in revenue to local government," and almost $13 million "in household income paid to residents." In addition, the "non-admission" but "event-related expenditures" amounted to more than more than $7.5 million being infused into the local economy. Clearly the arts are playing a significant role in Erie's economy.

A review of Elizabeth Currid-Halkett's "The Warhol Economy" on Amazon explains that the author believes NYC's economy is hugely dependent on "social life … where creative people meet, network, and exchange ideas." Troublingly, Currid-Halkett's book reports that "urban policymakers … have not only seriously underestimated the importance of the cultural economy, but they have failed to recognize that it depends on a vibrant creative social scene." Currid-Halkett noted the "importance of social milieus in the production of culture" and that this creative vitality attracts "high human capital from around the world."

While NYC is a world apart, Erie should take note of Currid-Halkett's point: A city's social scene informs and frames the cultural economy and these both impact the larger economy. Business leader and author Margaret Hefferman said that "for good ideas and true innovation, you need human interaction, conflict, argument, and debate. Our region's arts organizations are at the forefront of fostering these vital interactions.

Supporting Erie's "arts and culture economy" is key to what Harvard economist Edward Glaeser describes as "the most successful economic development policy" for cities: "attract and retain smart people and then get out of their way."

Lisa Austin can be reached via email Lisa@civitaserie.com; or by scheduling a Friday morning meeting at the Civitas office in the Masonic Building.