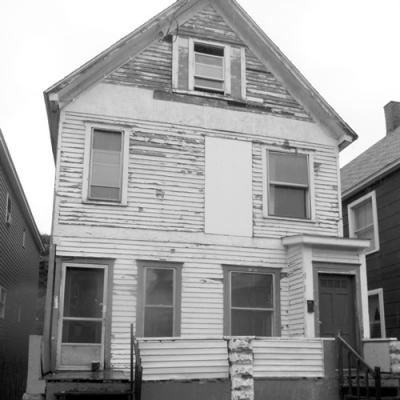 Broken windows, missing doors, sagging porches, peeling paint, collapsing garages, and caved-in roofs attract crime, discourage investment, and lower property values. Not surprisingly, a 2001 study by researchers at Temple University revealed that blighted properties devalue nearby properties; great homes located "within 150 feet of an abandoned unit" almost always suffer exponentially-reduced sales prices. A 2015 study for the City of Erie's Comprehensive Plan by CZB identified 4,500 blighted properties in the city. According to Mike Baker of the Erie County Department of Planning, there are 48,517 structures in the city of Erie, including garages, sheds, etc. This means almost 10 percent of structures in Erie are blighted. Inevitably, some will be demolished. But many can be saved if we are willing to take action as a community. To fight blight we must: initiate focused code enforcement, pass new ordinances to support code enforcement, and embrace creative homesteading options.

In their "Blight to Bright Toolkit for PA," the Housing Alliance of Pennsylvania listed these blight reduction benefits: improving the health of residents, raising property values of nearby properties (by as much as 30 percent thus increasing tax revenues), and reducing crime - especially gun-related violence.

Obviously, this lengthy process is not effective in addressing blight.

Other cities have instituted a citywide housing court to help judges to understand the scope of an individual property owner's violations. The establishment of an Erie Housing Court could eliminate the current practice that seems to be inadvertently promoting blight in Erie.

The Housing Alliance of Pennsylvania's toolkit suggests a "Quality of Life Ticketing Ordinance" to give code enforcement officers the authority to issue tickets and "levy fines for property code violations without a hearing." The toolkit suggests that officers begin "focused efforts addressing the worst properties," and publicize their efforts "to encourage compliance" from owners of other neglected properties. The toolkit warns that repeat offenders must be dealt with by creating "progressively higher fines and penalties."

The Reinvestment Fund of Philadelphia encouraged their city to enact a "Doors and Windows Ordinance" requiring that "all structures on city blocks with 80 percent occupancy have working doors and windows." Doors and windows blocked by boards or cinderblocks were fined at a rate of $300 per day per opening. Thus, ten boarded windows would result in a fine of $3,000 a day.

Philadelphia enacted Act 90, which permitted the City Housing Court to attach fines to the personal property (held locally or in other municipalities) by the owners of the property found in violation. Such legislation is needed because, as Jeffrey Fraser commented in the Pittsburgh Quarterly, "it's not unusual for back taxes and penalties to exceed the market value of a house, encouraging owners to ignore investing in its upkeep or to walk away from it entirely." If Act 90-type legislation were enacted here, fines for a blighted property in the City of Erie (that is owned by someone living in Florida), could be recovered, along with back taxes, via liens on the Florida property.

While being respectful of individual property rights, the community's rights must also be addressed. Before neglected properties decline beyond reasonable repair, the City of Erie, like the City of Philadelphia, must be given the authority suggested by The Reinvestment Fund of Philadelphia to "transfer ownership to responsible owners through conservatorship, eminent domain, or other tools." The City could utilize the findings of CZB planners and initially focus code enforcement in the highly visible "tipping point" neighborhoods on East and West Sixth, Eighth, 10th, 12th, and 26th. As these neighborhoods are stabilized, the work could spread. A citywide program could employ members of unions, craftspeople, artists, and student apprentices working in wood, masonry, tile, paint, plaster work, electrical work, plumbing, and construction.

Sue Moyer has worked to revitalize Erie's neighborhoods for 15 years. She serves as the PA Elm Street Manager for the SNOOPS Neighborhood Association, and served in the same capacity Erie's Little Italy Neighborhood. She is also the former Executive Director of the Bayfront East Side Taskforce. Lisa Austin, of CivitasErie, is a social-sculptor who co-founded All Aboard Erie, Innovation Erie, and Preservation Erie, and initiated dozens of projects and events including the Made in Erie Marketplace and the Industrial Design Workshops at Blasco Library's Idea Lab. Austin teaches three-dimensional design and sculpture at Edinboro University. Civitas members can be reached at their website www.civitaserie.com, via Facebook at CivitasErie, by leaving a message at 452.8401, by emailing Lisa@civitaserie.com, and by scheduling a Friday morning meeting at the Civitas office in the Masonic Building, 32 W. Eighth St., Erie, PA.