Because we don't have any preservation ordinances or a demolition review board, no building is protected. City Hall must issue a demolition permit to any property owner willing to pay the fee.

by CIVITAS members: Lisa Austin and Stephen Sonnenberg
View ProfileRSS Feed
May 14, 2014 at 3:19 AM 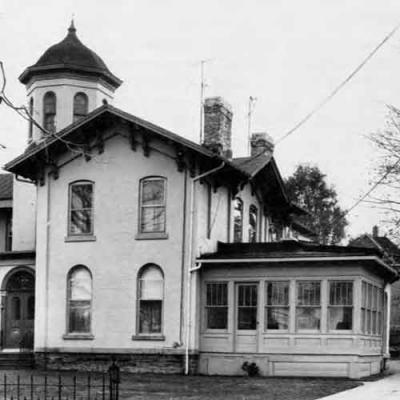 reservation Erie's Melinda Myers says that of the thousands of buildings in Erie, "we have only three clusters" of National Register listed districts.  But, because we don't have any preservation ordinances or a demolition review board, no building is protected.  City Hall must issue a demolition permit to any property owner  willing to pay the fee.

Do you know someone who inherited a diamond ring? If they decide to toss their heirloom off Dobbin's Landing, it does no harm. But throwing away buildings does harm Erie.  Preservation Erie's Dr. Chris Magoc says that in a way, historic homes, churches, schools, stores and factories "belong to all of us."  These buildings are part of the public realm; it is our duty to protect them.

On April 12, the Heman Janes house at 125 W. 21st St. was torn down.  Mr. Heman Janes (1817-1905) made a fortune in oil, wood, and in buying and selling land from Virginia to Ontario.  A Prohibitionist, Janes challenged the selling of alcohol; angry liquor vendors briefly barricaded him at his 21st street home. Decades later, along with William Reed, H.J. Curtze and others, Mr. Janes served as a corporator of the Erie Cemetery (no liquor is sold on the premises).

A part of the West 21st Street Historic District, the Janes House was featured in the "Erie Style" handbook and was praised for its "rounded window openings and doorways, low-pitched rooflines supported by ornate bracketing" and unusual octagonal tower.  Architect Jeff Kidder called the Janes house "Erie's best example of the Italian Villa style."

The Village at Luther Square (VALS) tore down the Janes House even though it was habitable – a half-dozen residents had to be evicted before the demolition.  Mark Gusek, VALS's CEO, said the interior was "chopped up very, very bad" and "beyond repair." Gusek wanted land to build homes for the elderly – a worthy goal.  But, was it necessary destroy this Civil-war era building to provide senior housing?

When the permit was granted, alarmed preservationists asked Gusek about the Heman Janes. Gusek (and the firm he hired) led the preservationists to believe only an unimportant rear addition would be demolished. After the Janes House was torn down, Gusek announced that the property has "a bright future" with new construction that will "blend in with" the historic district. Magoc said he would call the demolition "criminal," but for the fact that it is not against the law. Magoc hopes the Janes may "serve as a martyred victim" to motivate the creation of preservation laws in Erie.

At the end of WWII, Winston Churchill urged the reconstruction of the bombed House of Commons saying, "We shape our buildings, and afterwards our buildings shape us."  Our buildings physically express a sense of who we are and what we value.  A century ago, when something wonderful was torn down, something more wonderful was built in its place. Sadly, whatever is constructed over the graveyard of the Janes will not be wonderful at all.

According to Jeff Kidder, while Erie travelers tour historic properties around the world, many "forget what is in their own front yard." Thanks to Preservation Erie, Erie County will have a complete inventory of historic properties by 2015.  In addition, Preservation Erie has called for a demolition review period; City Councilman Dave Brennan is writing legislation. Meanwhile, $1.2 million may be spent tearing down the McBride Viaduct. Roosevelt School still sits vacant, and Chuck Scalise recently announced that H.A.N.D.S. has "no plans" for the Villa Chapel.  These two gems are enduring a slow "demolition-by-neglect."

Civitas members can be reached at their website www.civitaserie.com, via Facebook at CivitasErie, by emailing Lisa@civitaserie.com, or by scheduling a Friday morning meeting at the Civitas office in the Masonic Building, 32 W. Eighth Street.