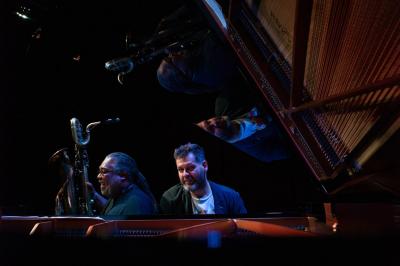 Since their debut duet Somethin' Holy (2001), Alex Harding & Lucian Ban have been an exciting and engaging contemporary jazz duo. Harding, a Detroit-born baritone saxophonist, has studied music under Yusef Lateef, Herbie Williams, and more (local jazz fans may remember his guest spot with the Ethnic Heritage Ensemble at the Erie Art Museum). His counterpart, pianist and composer Ban, grew up in Transylvania — nearly 5,000 miles from Artlore Studios, where Harding and Ban will be performing later this month.

"It's easy to detect that the duo has been collaborating all these years," said Glenn Astarita for All About Jazz earlier this year. "At times they seem clairvoyant while interacting and reinventing, without rushing the game-plan by veering off into abstruse angles or rummaging through extended soloing blowouts."

While retaining a strong partnership in the jazz community, Harding and Ban compose, perform, and record solo work as well. Harding has authored a number of solo jazz albums while guest-starring on over 40 full-length recordings by other musicians. Since moving to the U.S. in 1999, Ban has played with renowned musicians such as Bob Stewart, Reggie Nicholson, Eric McPherson, and more. So far in his career, Ban has released 14 albums.

The two come to Erie from Pittsburgh. Erie, the smallest city on their tour, is one of 11 upcoming shows on their intercontinental tour of Europe and the U.S.

While admission is free, a donation of $12 is suggested by Jazz Road, a national initiative of South Arts through whom this event is made possible. Refreshments and "great vibes," are promised alongside an evening of contemporary jazz. — Hannah McDonald