Each day boasts unique events and exhibits along with traditional fair rides, food, and games. 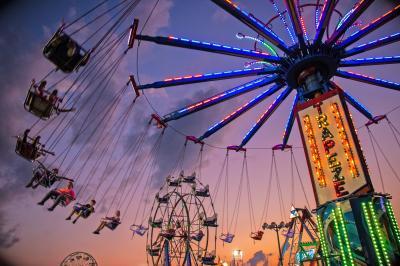 The last weeks of August hold some of the largest and most well-attended events of the summer. The Crawford County Fair and the Erie County Fair promise plenty of wholesome family fun in the countryside surrounding Erie.

Each day of the fair boasts unique events and exhibits along with traditional fair rides, food, and games. On the first day, the 4-H robotics exhibition showcases the mechanized products of local kids. This will be followed by the fair queen coronation and a tractor pull to close out the day. The rest of the week will be full of animal showings, artisan goods, ceremonies, and judging. Local horses, cows, pigs, rabbits, and more will be on display with their owners on hand for fairgoers to visit with and admire. An exciting final day will include a demolition derby, barrel horse racing, and music on the grandstand. Country artist Kane Brown will perform on Wednesday, Aug. 21, with the Australian duo Seaforth opening. Brown, the 25-year-old multiracial singer has had a string of smash successes since his self-titled debut album in 2016, where he had five simultaneous number-one Billboard hits spanning every country chart. On Thursday, Aug. 22, contemporary Christian rock act The Newsboys will take the stage. Active since the mid-80s, the band is now fronted by Michael Tate, formerly of DC Talk. Mac Powell and the Family Reunion will open up the concert, led by the former frontman of Third Day.

This county fair — featuring locally raised and prized livestock, carnival games, rides, and food — has been an Erie-area favorite for over 100 years. On Sunday afternoon, prior to the fair's regular hours, the queens of the 135th incarnation of the historic summer event will be crowned, followed by a Vesper Service with multi-instrumentalists Dan and Galla. The main attraction Monday will be harness racing, where jockeys ride behind their steeds in pulled carts. There will be a rodeo on Thursday night, with bull riding events in the grandstand for an additional $5, and multiple horse shows and a demolition derby concluding the celebrations on Saturday. Throughout the week, there will be musical performances from local acts like Rankin & Schell, Jesse James Weston, and Shady Side in the Gazebo South Midway. Wednesday is Senior Citizen Day with attendees over 65 years of age getting free admission. — Hannah McDonald