Even in a minor league culture that oozes quirkiness and absurdity cowboy monkey rodeo is out-of-the park ridiculous. 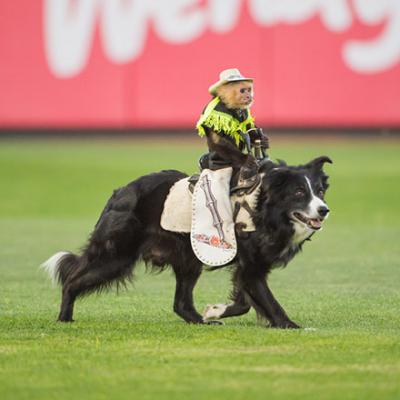 Between the long bus rides, extended hotel stays, and paltry pay checks, minor league baseball has often been described as a grind – with the occasional "organ grinder" monkey.

Even in a minor league culture that oozes quirkiness and absurdity (e.g., teams named the Hartford Yard Goats and the Binghamton Rumble Ponies), cowboy monkey rodeo is out-of-the park ridiculous.

The enormously popular – and controversial – cowboy monkey rodeo returns to UPMC Park after drawing 5,346 fans last summer. Depending on what side of the pole you're standing on, the event is either home run entertainment or a foul against animal rights. As intended, cowboy monkey rodeo is a cute and (significantly more) hirsute miniaturization of ranching competition. A tiny Capuchin monkey trades its fez for a Stetson and is strapped on the back of a border collie, which instinctively (as a herding breed) chases sheep around the diamond.

Even in a minor league culture that oozes quirkiness and absurdity (e.g., teams named the Hartford Yard Goats and the Binghamton Rumble Ponies), cowboy monkey rodeo is out-of-the-park ridiculous. Audience reactions have ranged from bemused delight ("WTF am I watching?") to indignation and outrage. The only thing more chafing than saddle sores is animal cruelty, and many activists perceive it as such. Opponents argue that consigning Capuchins to a life of dumb spectacle is an affront to their freewheeling and inquisitive nature. Furthermore, detractors claim the monkeys can suffer whiplash while mounted on the shifty collies, which can accelerate to speeds of 30 miles per hour.

Poor monkeys can't get these damn humans off their backs. Conversely, the SeaWolves will attempt to get the proverbial monkey off their backs as they take on the Richmond Flying Squirrels and make a push for their first postseason berth since 2013. The first 250 kids through the gates will eat free, and select draughts will be available in the Bud Light Beer Garden for two dollars. No matter how you feel about cowboy monkeys, I think we'd give these perks two opposable thumbs up. — Matt Swanseger