Cross Off Steve-O at Jr's from Your 'Bucket List' 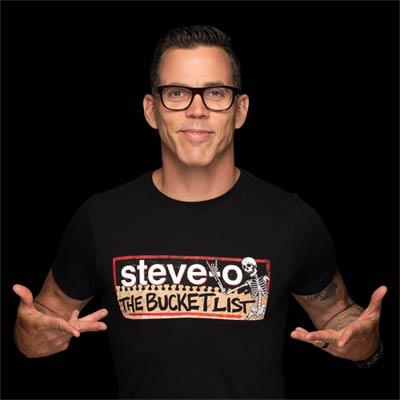 "Just landed in Erie, PA," the tweet read. "Is there any such thing as going snowboarding around here this time of year?"

And with that, Steve-O's epic March 2015 Erie visit began, and what started out as a two-day, five-show weekend engagement turned into an extended stay into the following week, during which the Jackass star discovered the hospitality and vibrancy that is so uniquely Erie's.

Our little city made a favorable impression — he said so himself at the time, declaring, "JR's Last Laugh is my favorite comedy club ever" — so it is no surprise that Steve-O, actual name Stephen Glover, is coming back for a second engagement during his Bucket List Tour, with five planned shows, all of which will likely sell out as they did four years ago.

Will the actor, stuntman, clown, author, musician, and comedian extend this visit? Erie still has a lot to offer in terms of winter sports, splashy lagoons and arcade fun (can you imagine running into him at Play Port, or Round One?). Whatever Steve-O's decision, the "red carpet" Erie rolled out for him the first time around should be considered an open invitation for him to stay as long as he likes. — Cara Suppa