"Cutie and the Boxer" reviewed

A beautiful portrait of learning to live the life you choose... 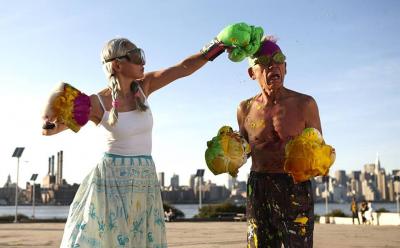 Ushio Shinohara took off his shirt and had his wife, Noriko, help him put on his boxing gloves. His skinny, wrinkly frame was exposed and so was the secret to his art: a pair of boxing gloves with a large piece of foam wired to each one, which were then dipped in paint and used as fierce paint brushes. The gloves were old and covered in a tie dyed mess of colors, but there, on Ushio's 80th birthday, his gloves and his giant white canvas seemed to be the newest objects in the room.

Wearing lime-green swimming goggles for protection, Ushio punched, hopped, grunted, and shouted as everyone in the background oohed, ahhed, and applauded the angry looking black spots that were dripping down the canvas. As Ushio and Noriko posed with a curator from the Guggenheim, we accepted our invitation into the life stories of these two struggling artists, as told by filmmaker Zachary Heinzerling.

Heinzerling spent a few years with the couple before they felt natural in front of the camera, finally resulting in some worthwhile footage after his prolonged stay. Lucky for us, he stuck with it and the result is incredible. Each scene is raw and powerful in its own way – there is beauty in everything from a close-up of Noriko braiding her hair to Ushio's messy eating. It doesn't take long to realize that this is not a movie about art, but rather a movie about marriage and just making it work. It's the story of Ushio and Noriko's past, present, and future, and Noriko's fight to find her voice in Ushio's light. She, too, finds her voice in art.

"Hi, I'm Cutie, and this is the true story of me and my husband Bullie. I'm always naked because I'm poor," reads the first ink drawing in Noriko's series of portraits she paints in a spiral journal. The series of drawings is titled "Cutie and Bullie" and throughout the movie, we see Cutie clean up after Bullie's drunken late night escapades, single-handedly take care of their child, and put her drive to be a successful Japanese-American artist on the back burner. Although Noriko tries to deny it, the ink drawings are gentle versions of herself and her husband, as well as a house for her resentment towards the years she lost to him.  Noriko is working on the final chapter of the series while Ushio is constructing cardboard motorcycles for his upcoming exhibition.

After forty years of marriage, Noriko has come to terms with the life she has chosen and the impact Ushio has made on it, and their combined show is a place where they can watch each other thrive in their own light, yet shine even brighter by finally choosing to support their similar passions. As an eighty-year-old Japanese-American pop artist in the twenty first century, Ushio has enough un-conventionalism in his life to continue his role as a real life version of Bullie.

The movie reaches its climax at Noriko and Ushio's shared exhibition. Ushio titled the show "ROAR," showing the dinosaur-like power of his gargantuan motorcycles, but Noriko changed it to "Love is ROAR," showing her frustration with love and the impact of the easy to say and hard to maintain four letter word. In their cramped studio apartment, Ushio and Noriko bickered about love's place in the title of their show. Ushio said he didn't believe in it, didn't understand it. But there in their small Brooklyn apartment, on their even smaller couch, Noriko fought for the love, and because of her, it stayed.

Noriko's drawings were transferred onto the walls of the singular room she occupied at their show, and Cutie and Bullie's story was shown to the world in circular motion. Noriko humbly took the praise she was finally receiving from spectators, the show was successful, and the final chapter of art and marriage was closed to the public eye.

Although the final chapter has been made in paint, Ushio and Noriko's constant battle between a love of art and the art of love is not over. They've simply reached a lasting point of contentment. As Ushio and Noriko slugged it out with paint covered boxing gloves and protective swim goggles in the final scene, the core of their marriage was revealed in both love and hate and a common understanding that even after forty years together, there are still many unwritten chapters to go. Cutie and the Boxer is a beautiful portrait of learning to live the life you choose, changing the things you can, and remembering that art is everywhere and all of it will reveal its meaning in time.

Have a suggestion for something I should check out? Want to share your experience with The Erie Reader? Email me at ehartleb@eriereader.com and follow me on Twitter @elliehartleb.