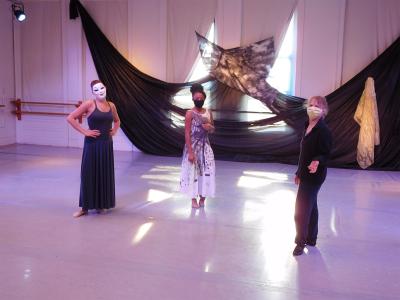 Vince Brocki
Dafmark Dance Theater, established in 1990 by Dafna and Jean-Marc Baier, is celebrating its 30th anniversary this season. It is known for its timely and provocative performances, such as Will There Be Singing? based on the events surrounding the murder of George Floyd.

When Jennifer Dennehy asked me if I'd be interested in writing about the 30-year anniversary of Dafmark Dance Theater, I was ready to leap right in, despite my two left feet.

But covering new territory, such as dance, is a challenge for me during COVID-19.

Fortunately, the creative forces behind Dafmark are adept at bounding over the hurdles that the pandemic presents to artists.

Next, I interviewed Jean-Marc and Dafna Baier on Zoom.

Then I watched "Will There be Singing?" This is the original dance Dafmark premiered on video for Erie's Blues & Jazz Festival. Immediately, I was plucked up and dropped into the contemporary, thought-provoking dance experience that Dafmark has been offering to Erie audiences since the Baiers arrived here in 1984.

Words on the screen at the start of the video explain why the pandemic cannot crush the imagination: "The nature of live performances has changed. But the creative voice remains essential and relevant to our time."

The stark, somber performance is gut-wrenching. It spurs the audience to follow the example of Dafna Baier, who says she felt compelled "to respond to a moment in time that cannot be ignored."

Expect a similar chance to reflect on a range of contemporary issues if you attend a collaborative event featuring Dafmark Dance Theater, the Lake Erie Fiber Arts Guild, and 1020 Collective Erie Nov. 7-21. Dafmark will perform on Nov. 7, 14, and 21, for a limited audience, by reservation.

The event is called 2020@1020, "A collaborative look at earth-shattering events in 2020." The exhibit, with artwork from the community, will touch on world issues, including the coronavirus pandemic, Black Lives Matter, climate change and weather disasters, the 100th anniversary of women's right to vote, and the 75th anniversary of the atomic bombings of Japan.

Exploring the wide world is not foreign to the Baiers. Jean-Marc, a native of Paris, received his bachelor of fine arts from the North Carolina School of the Arts and his master of fine arts from Southern Methodist University. From 1984 through 1990, he directed the Mercyhurst College (now University) Dance Department. Born in Israel, Dafna worked as rehearsal director and ballet mistress for Bat-Dor Dance Company and the Kibbutz Dance Company in Israel, the Repertory Dance Company of the Southwest, and the Dallas Opera in Texas. She also taught and choreographed at Mercyhurst.

"It was an exciting time for us, teaching, creating and sharing our vision of the world with young minds," they said in an email in response to my questions. "In 1990, we had a major decision to make. We could return to Europe or create our own company in Erie. We chose the latter, in part because we had quite a few dancers who had graduated from Mercyhurst interested in working with us and because we had built an audience during those college years. So we created Dafmark ('Daf' for Dafna and 'Mark' for Jean-Marc)," they wrote.

Erie is a good place to nurture dance talent. When I asked about Erie native Stephen Galloway, who became the principal ballet dancer at the Frankfurt Ballet and creative consultant and choreographer for the Rolling Stones, the Baiers got excited. "Funny that you would mention Stephen Galloway! He got his early training at the Martin Luther King dance program (the Erie Bayfront Ballet, now the Erie Dance Theater). Stephen studied with us and performed our choreography when we first came to Erie," they wrote. "His talent was blinding. We suggested that he go to Europe when he got a job with the Frankfurt Ballet. His success as a dancer and creative mind has been a beautiful thing to witness."

I asked how and why they used their art to encourage audiences to think about important issues.

Dafna said that she has always linked dance to her love for music, literature, theater, and the visual arts. "Hearing voices that were so powerful, politically and socially, it was a natural progression to use the language of dance to express dissent, amazement, and emotions. I have always felt that dance was my mother tongue," she said.

Jean-Marc became interested in dance while studying at Hebrew University in Jerusalem, although he didn't meet his future wife until they were both in Dallas. "If early on our perspective was linked to our cultural background, with time, it evolved with the culture of this country," he said.

The pandemic has impacted their art in a number of ways. "Dance is an exposed art form," Dafna said. "Physicality and contact are at its core. Physical distancing forced an introspective journey that was a new experience. Working alone in the studio for months, with the amplification of world events, (there was) the awareness that everyone was going through something similar and yet, feeling a sense of luck that we could keep on creating and learning," she said. "A sense of responsibility was essential in response to the brutality of our times within our society — discrimination, injustice, and racism. What is strange is that all that was happening around us had been part of our creative journey for 30 years."

Liz Allen still laughs about the time her son asked why an Erie football field was named after a Russian ballet dancer. Liz's family had seen Mikhail Baryshnikov dance with Twyla Tharp when they lived in St. Louis and her son had mixed him up with NFL great Fred Biletnikoff. You can reach her at lizallenerie@gmail.com.

Gallery hours are Tuesday by appointment, by calling 814-983-8655; and Wednesday through Saturday from noon to 5 p.m.

Dafmark will offer a performance linked to the exhibit on three Saturdays: Nov. 7, Nov. 14 and Nov. 21. Doors open at 6 p.m., with the dance presentation at 6:30 p.m. There is a limit of 22 guests per night and reservations are required by emailing dafmark@gmail.com and indicating the number of attendees. Donations are appreciated. Masks are required.

Dafmark Dance Theater officially observed its 30th anniversary on Sept. 1. But rather than celebrating that landmark with large gatherings, Dafmark has been documenting its past and current work on video. To view that video and to learn more, visit www.dafmarkdance.org.