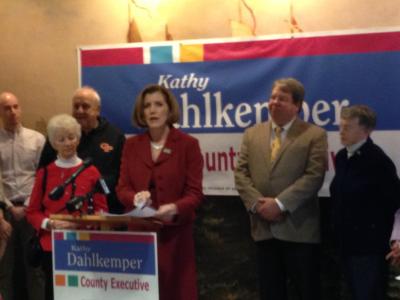 Flanked by family and friends at the Blasco Library, former U.S. Congresswoman Kathy Dahlkemper made her official public announcement that she will run against incumbent Democrat Barry Grossman for the office of Erie County Executive.

Dahlkemper, 55, opened the press conference by stating that she ran for Congress because she wanted to see northwestern Pennsylvania – the area that she loves – "become a healthy, thriving community."

She repeatedly emphasized throughout the nearly nine-minute speech that she wants Erie to be a place where "our young people grow up, find a job, and choose to stay… and raise their families."

The mother of five referenced her own family, noting that two of her children live in Erie, while the other three have moved away. She cited that she often hears stories of how young people want to remain in Erie – or even return – but choose not to because "there isn't anything here for them."

"We must not feel resigned in having leaders who are comfortable in managing the continued downfall of our home," she said. "We deserve better. Our children and the next generation deserve better.

"As citizens, we must demand better of our leaders," she continued. "If we are not moving forward, we are falling behind. If we are not developing new industries, then some other community is. And if we're not encouraging new entrepreneurs, then great talent is going elsewhere."

Almost 6 years after her congressional term began, Dahlkemper said that after contemplating her continued call to public service, she realized her motivation remains the same: to make Erie a "vibrant and thriving community full of optimism and opportunity," and that the best way she could meet that goal is to serve the area in a local office.

"Everyone in Erie County deserves to live in a community where leaders work together to ensure a bright future where the American Dream is still possible," she added. "We must build on our historic strength of manufacturing, yet look to the industries of the future. We must build a new economy based on innovation, ideas, and growth-potential."

She also referenced President Barack Obama's State of the Union Address, in which he called for the creation of 15 innovation zones.

"I ask you," she said, looking up at the audience of nearly 50, "Who here is working to make sure Erie County is one of those 15? Who's dreaming the big dreams that can – and will – happen here in Erie County?"

Dahlkemper cited the area's universities and its natural resources, as well as a "solid transportation infrastructure and the finest labor force in the county, bar none" as industries upon which to build.

"We need bold, out-of-the-box thinking, collaboration between all sectors of our economy, and a large group of believers in our potential as we pursue a vibrant future for our region."

Dahlkemper pledged that she would work hard every day to, "make Erie County a place where we can grow up safely, find a great job, and live the American Dream."

She closed her speech, posing questions to the residents of Erie County:

"Do you choose the all-too-familiar path of steady decline, or do we choose a new path to a vibrant future? Do you believe in the potential of Erie County as much as I do? Do you want leadership that looks to finding the solutions together, across party lines – across community lines – for the benefit of all Erie County citizens?"

She went on to quote President Franklin D. Roosevelt, who said, "The only limit to our realization of tomorrow is our doubts of today."

"I have no doubt that Erie County, with all of us working together, can – and will be – the envy of the state, and the envy of the nation," Dahlkemper answered. "Today, I ask the voters of Erie County to join me in realizing this future for our children and our future generations."

In an interview after the announcement, Dahlkemper, who had been rumored to be considering a bid for offices ranging from Erie Mayor to Pennsylvania Governor, said economic development drove her decision to enter the county executive raise.

"That's really what I think gets me excited about this position – really being able to make a change, that I can say I did this for my grandchildren – for the future generations," she said. "I really want to make this a model county. For the state and for the nation."

Dahlkemper cited the lack of connection with leaders as something she plans to change, stating that she intends to "work hard to listen to people and then make tough decisions… but if we don't make decisions to move forward, we will continue to decline."

Dahlkemper, who served one term in Congress as the representative for Pennsylvania's 3rd district before losing to Republican challenger Mike Kelly in 2010, said her experience in Washington would be advantageous to the county.

"First of all, I have great relationships with the Obama administration, and as we're looking at trying to do things here in Erie County, I can reach out to those people in Washington and find if there's ways for us to fund some of the great projects we want to do, if there's opportunities to connect in better ways than we are currently with the federal government," she said. "And I also understand how Washington works, so I understand the pitfalls too."

Amidst her decision to challenge Grossman, who is seeking his second four-year term, Dahlkemper has received criticism from within the Democratic Party. While some have suggested such a contest would weaken the party, Dahlkemper said her decision strengthens the entire democratic system, and added that her plans to challenge an incumbent isn't uncommon for Erie (Grossman, 66, challenged Democratic Incumbent Mark DiVecchio, defeating him in 2009's Democratic Primary before going on to narrowly beat Republican challenger Mike Kerner that November).

"I like people to have a choice – I always like to have a choice and I get frustrated when I go to the voting poll and I don't have a choice," Dahlkemper said. "I'm always encouraging people to get up and run, but most importantly, Erie County is a Democratic county. We have had numerous challenges within our party to incumbents, whether it be to county executive role, whether it be in the mayor role, or be within the council roles, so it's not unusual in Erie County to see a Democrat going against a Democrat."

She said that she didn't believe her decision hurt the Democratic Party, adding that she and Grossman have agreed to not run negative campaigns.

"I'm excited about this," she said. "As county executive, I'm a hard worker, and I can put my energy into this – my whole heart and soul, which is what I did when I went to Congress. Some people called me one of the hardest working members down there because I was up late at night doing all my homework and then up early in the morning and going all day. And I'll do that here too."